Close your eyes. I want you to picture this. You’re sitting in a beach chair on the shore of a tropical lagoon with your toes stuck in the sand. You can feel the sun’s warm rays on your face. You hear the sound of the tranquil waves lapping on the beach. And you smell the most amazing aroma. The unmistakable bouquet of roasting kalua pork over an open fire.

Are you hungry yet? Because it’s lunch time and your stomach is grumbling because you haven’t had anything to eat since breakfast. And the only place that you should be considering at this point is Marination.

Marination offers a unique blend of Hawaiian-Korean cuisine served via its famous food truck, as well as at its four brick-n-mortar locations throughout the Seattle area.

The company is the brainchild of founders Roz Edison and Kamala Saxton.  The spark for their business came after they heard about a famous taco truck named Kogi serving Korean tacos in the Los Angeles area. Knowing that nothing like that existed in Seattle, Edison and Saxton decided to give it a go. Their business was launched in 2009 with the unveiling of Big Blue, their custom food truck, which was among the first on the Seattle food truck scene. Within a short period of time, buzz surrounding the venture began to spread, with help from awards such as “Best Food Cart in America” on the Good Morning America, as well as “Best Food Cart in Seattle 2010” from Seattle Magazine. 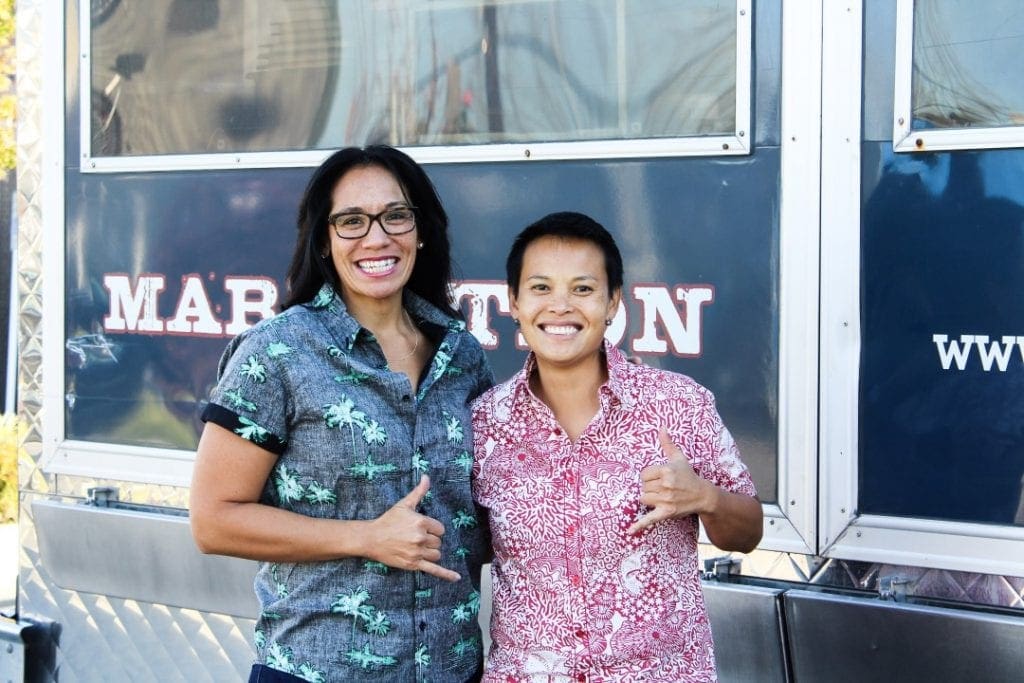 Knowing that they needed to even out their cash flow (read: get more customers in those long, rainy winter months in Seattle), the former educators-turned-restauranteurs decided to open their first permanent location in 2011, which turned out to be Marination Station, located in the Capitol Hill neighborhood at Harvard Ave and Pike St. Subsequent openings included Marination Ma Kai, located at 1660 Harbor Ave SW in the North Admiral neighborhood, Marination 6th & Virginia at 2000 6th Ave downtown, and Super Six located at 3714 S Hudson St in the Columbia City neighborhood. They’ve also branched out to now offering catering services in the Seattle area.

The restaurants are considered “fast casual,” the term that describes places that offer the convenience of fast food, but with a more inviting sit-down atmosphere and better fare. This laid-back style of delivery fits Marination to a tee. Customers get to know each other while in line or cozied up to each other at tables. One can often hear a customer asking another, “What have you got there?”

The menus aren’t overly extensive but still offer something for every palate (as long as your palate is Asian fusion.) Among the staples are seven different types of tacos, (8 if you include gluten-free), two types of sliders (kalua pork and SPAM), kimchi fried rice or quesadilla, pork katsu sandwich, Korean cheesesteak and much more.

Storage – A Solution to a Growing Problem

As the company has grown, so has the paperwork. So much so, that they began looking for a place to store their files. Enter West Coast Self-Storage Columbia City. Edison chose the storage facility because of the convenient location (only 30 minutes away) and its ability to provide a flexible solution for their long-term document storage needs. She also appreciates how simple it is to store there. “Working with WCSS has been easy. The space is well-maintained and they have an ample number of carts in order to get our documents to the storage unit.”

So, if the rain is getting you down this winter, throw on an aloha shirt and some wayfarers and head over to Marination. It will bring you back to your “hauʻoli wahi” (happy place.)