Best Places to Ride an Electric Scooter in Portland, Oregon

After a four-month pilot program last year that brought e-scooters to the streets of Portland, the city has instituted a longer, year-long pilot to bring 2,500 electric scooters to Portland streets. If you haven’t tried one out yet, they’re a great way to get around town. But you’ll want to make sure you drive the e-scooter on paths and streets that the city has approved for this traffic. 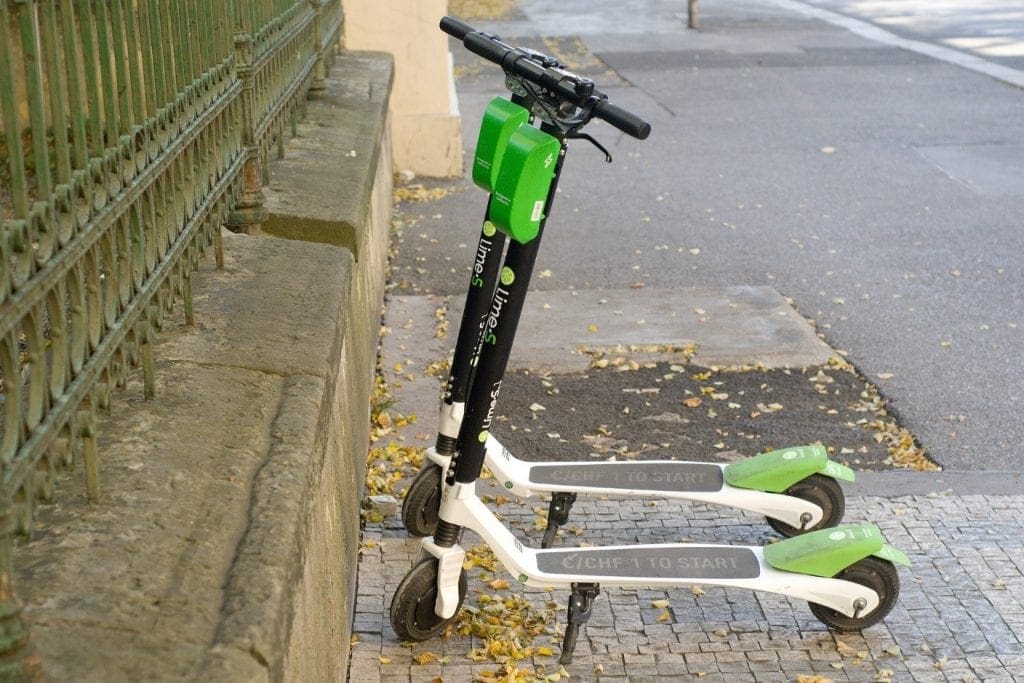 Portland has designated certain streets to allow for e-scooters. The types of paths include:

Here are the major routes that the City of Portland has approved for electric scooters. 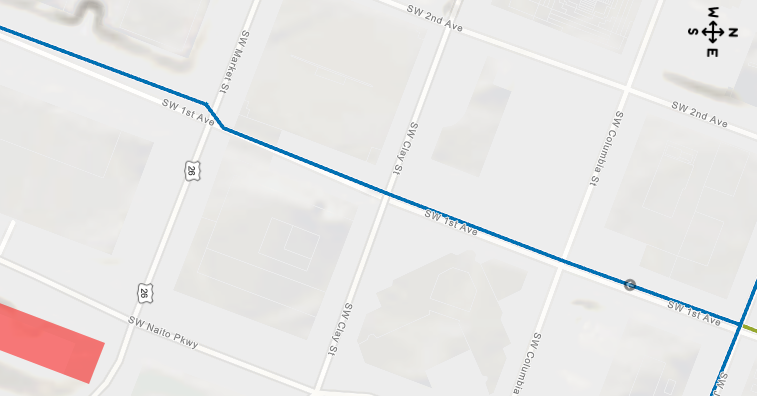 While you can ride a scooter south from SW Morrison St, the dedicated path starts at SW Jefferson St and goes south for six blocks until it ends at the corner of SW Arthur St and SW 1st Ave. You can then take a left on SW Arthur and take it to where it merges with SW Kelly Ave. But this is marked as a difficult connection.  The route officially dead ends where it meets SW Hood Ave.

This south-moving, one-way route starts at SW Madison St and heads four blocks until it reaches SW Market St. There, it turns into a multiuse route, which continues until SW Lincoln St.

This route starts at SW Jefferson St and head south on SW 5th Ave for roughly 10 blocks until it merges with SW Broadway traffic and continues on for two more blocks until you reach SW Barbur Blvd. If you want to continue, you can take it all the way to SW 74th Ave in Tigard.

The SW 13th Ave route starts at W Burnside and heads south. The bike/scooter lane will take you 13 blocks until it ends at SW Montgomery St. If you want, you can take a right on SW Montgomery and take this into the Southwest Hills neighborhood, but you’ll be sharing the road with cars, having no dedicated bike/scooter lane to protect you.

This protected, buffered route starts at SW Naito Pkwy and head west for ten blocks to SW 10th Ave. Theoretically, you can turn right on SW 10th and take it for two blocks to NW Couch St, which is a shared roadway (meaning you can ride your scooter on it, albeit without a dedicated lane.) But this section is marked as a difficult connection so be careful.

This protected, buffered route starts at W Burnside St and heads east for 13 blocks to its terminus at SW 1st Ave although you can continue to SW Naito Pkwy without a bike/scooter lane.

This route starts where SW Jefferson St meets SW Naito Parkway and then heads west on SW Jefferson for 1.3 miles to the eastern edge of Washington Park where SW Murray Lane intersects with SW Jefferson. There is a dedicated bike path that runs the length of this one-way road, but you’ll encounter stoplights and heavy traffic as this street is a major corridor.

One block north of SW Madison is SW Main St. This one-way street heads west and the contains a dedicated bike path. Unfortunately, it only goes three blocks to SW 3rd Ave. 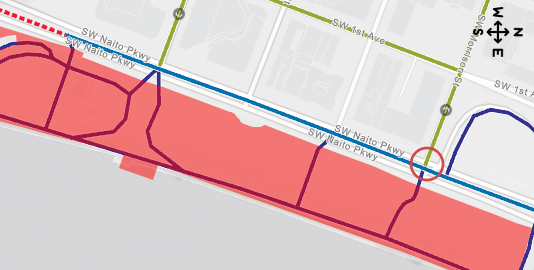 One of the longer scooter runs you can make is to follow SW Naito Parkway north from its beginning near the Rose Festival Foundation building at 1020 SW Naito Pkwy. 1.5 miles later you’ll reach the end of the line at NW 9th Ave. Much of this road has a very nice designated bike path, with parts that have two bike lanes side-by-side.

Just a hair shorter (1.4 miles) is the route traveling along SW 14th Avenue. The path starts at SW Columbia St, but the true, dedicated bike path doesn’t begin until SW Jefferson. From there, you’ll travel two block and then have to switch sides of the road from left to right if you want to stay on the bike path. After that you’ll stay on the right side for the remainder of your journey. For part of the route, you’ll be sharing your lane with parked cars so be careful of car doors opening up unexpectedly. The route ends where NW 14th Ave meets NW 15th Ave.

This route travels from the intersection of NW 3rd and NW Glisan St south ten blocks to SW Harvey Milk St. Similar to SW 2nd, this is a protected bike lane, and offers a level of safety for those new to the electric scooter scene.

This route starts at the corner of NW 9th Ave and NW Lovejoy St in the Pearl. You’ll take it to the corner of Lovejoy and NW Broadway and head south. The path is an unprotected bike path, with the first section containing double-striped divider for extra comfort at least until you get to NW Hoyt. Then it switches to a standard bike lane that often is shared with parked cars and turn lanes. So, pay attention here. The route takes you right out of the city where it connects to SW 5th Ave, with a left on SW Sheridan St. until it connects with SW Barbur Blvd. Theoretically, you can take this all the way to SW 74th Ave in Tigard if the scooter’s charge takes you that far (around 9 miles) and you’re willing to pay that much.

Dedicated scooter lanes become a little less frequent here, but you can still get around easily enough.

You can actually take this route from the side of the river (Willamette River) beginning at 2nd Ave. Head east over the Burnside Bridge and the bike/scooter lane continues to SE 13th Ave.

The route over the Morrison Bridge can starts with a dedicated bike lane at SW 2nd Ave. This switches to a multiuse path that is separated by a median for the length of the bridge and continues until it connects with SE Water Ave.

The Tilikum Crossing, completed in 2015, is a multiuse path that allows scooters. Take it from SW Moody Ave on the west side of the river to SE Water Ave on the east side.

This route actually starts at the corner of SE 4th Ave and SE Ivon St. This two-way road has scooter/bike lanes on either side of the road. You can take this north all the way to where SE Water Ave meets SE Stark Ave and then three more blocks east until you reach SE Martin Luther King Jr. Blvd. The route is roughly 1.3 miles in total.

Another north-south route, this has its beginning at SE Division and SE 8th Ave. You’ll travel approximately two blocks northwest on SE Division before turning right onto SE 7th Ave. From there, travel 18 blocks north and turn onto SE Sandy Blvd where you can travel another six blocks where it meets another scooter path on E Burnside St. This a standard bike/scooter lane with a wide shoulder and higher traffic.

This route officially starts at SE Water Ave, but the Hawthorne bridge has a multiuse path for bikes and scooters that you can take starting on the other side of the river at SW 4th Ave. The SE Hawthorne route starting at SE Water heads east for 11 blocks, terminating at SE 12th Ave. The first few blocks have a protected bike/scooter lane, and then it becomes a standard, dedicated lane for the rest of the route. You can connect to SE Madison St via SE 12th, but there is no designated lane between these two blocks so you’ll have to be careful.

This mirrors the Hawthorne route mentioned above, but is only a standard, unprotected bike/scooter lane the whole way.

This east-moving route starts at the on-ramp from MLK Jr. Blvd and goes all the way to SE 26th Ave. 19 blocks in all. The route is a standard bike/scooter lane. Unfortunately, it does not connect to any other scooter lanes there.

This quite long route can actually be started where N Martin Luther King Jr Blvd meets N Marine Way in Bridgeton. Follow that south until you get to N Vancouver Ave (one-way south). You’ll enter a “Difficult Connection” area but once you get to the intersection of N Schmeer Rd and N Vancouver, you’ll have your own protected lane. The protected lane runs about a half-mile until NE Farragut St. It then turns into a regular bike path that takes you all the way to NE Broadway (about 3 miles).

This one-way route starts at N Wheeler Ave and heads north to NE Killingsworth. It’s a buffered path, with double white lines separating you from motorized traffic, so it’s a safer route if you’re headed north.

There are many other routes that the City of Portland has designated as passable for scooters. The city has published an interactive map that details every street and path that you can ride your scooter on. 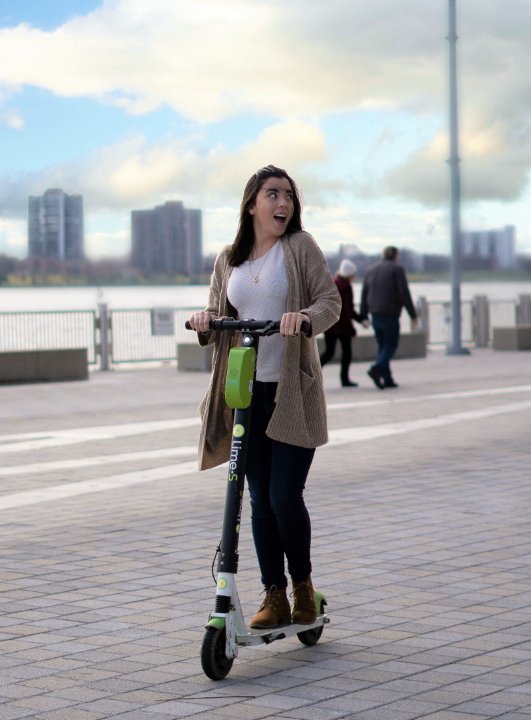 Rules of the Road

It must be mentioned that there are several state and local laws that e-scooter riders must obey when out on the roads. You must:

Scooters are definitely a fun way to get where you’re going in Portland. By following the designated paths and observing the laws, you’ll also get to your destination in one piece.