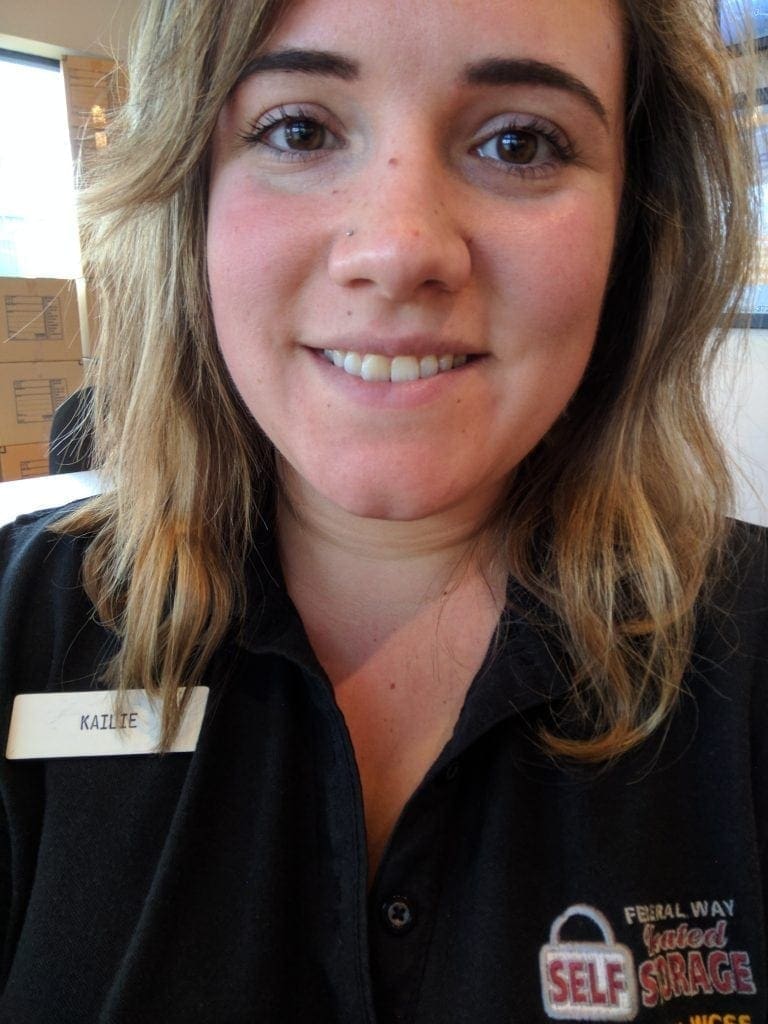 Tell us how you first got involved in the self-storage industry.

I started as an Assistant Manager at Safeguard Self Storage in Kent, and worked there for a little over two years. In that time I learned a considerable amount about self-storage. I worked at multiple stores learning different styles of management from the various managers I worked with. One manager in particular, Paul Pankow, influenced me the most. He taught me anything that I wanted to know and I took full advantage of that, from financials to detailed cleaning.  I really pushed myself to take on as much information as possible and Paul made me hold myself to the highest standards in everything that I do. That being said, I knew I wanted to eventually become a manager of my own store. When the manager position at Federal Way opened up, I immediately jumped on it! I felt I was ready to take on my own store and apply all that I had learned over the past few years as an assistant manager and set myself up for as much success as possible. I was ecstatic when I was announced as Manager of Federal Way Heated Self Storage. Just recently, I was named Manager of another of our facilities, Totem Self-Storage. I’m looking forward to the challenge of making Totem the best storage facility in Kent, Washington!

What do you find most interesting about working in storage?

What I find really interesting about working in storage is that you meet all types of different people and they all have a story. I find that the most interesting part, because these people are at a point in their lives that is changing, whether it’s good or bad, and that’s why they need storage. We are here to help them with storing their items and sometimes being their “therapist” at the same time. I don’t mind lending a listening ear!

Tell us about a great customer experience you’ve had.

When I first came to manage Federal Way, there was a tenant named Bob who had been storing with us since 2012. The first time I talked to him, he immediately told me he didn’t like me. He was upset that the previous manager, KJ, wasn’t here any longer, which I understand because KJ is awesome. However, Bob’s reasoning for not liking me was that he felt like I was not a genuinely nice person and neither was my company. He said I had a fake smile and that I didn’t care about any of my tenants. This was shocking to me because I work really hard to give all of my customers the best service possible. Bob had also written an online review revealing the same feelings about me and the company. I was upset about this review because I was being myself with Bob just like I am with all of our tenants.

Instead of being mad at him for the review he wrote, I decided that I was going to change Bob’s opinion of me and our company. I had quite a few conversations with Bob over the next year. He had changed units a few times and needed extra attention when it came to courtesy late calls. I made sure we were as accommodating as possible during these late calls. After a few months, I noticed Bob was starting to get more comfortable coming into the office and talking to me on the phone.  Things progressed to the point that Bob was now coming into the office to chat with me anytime he came to get into his unit. We really started bonding and I enjoyed talking with him.

A situation arose in Bob’s life that forced him to move his belongings out of our storage. I was sad to see him go, but he did something that I’ll never forget. Bob called to thank me for the great customer service our store had given him and that he was wrong to judge me in the first place.  He said to keep up the good work. I thanked him for his kind words and wished him well. This might seem like a small gesture, but it was huge for me!

What do you do when you aren’t working?

I am probably cooking, watching Netflix, or having fun with my husband and friends.

What’s one thing you couldn’t live without?

I would have to say peace and quiet. Once a year my husband and I go out to these cabins near Mount Rainier National Park. It is so quiet and peaceful out there, I feel like it recharges me until the next year that I go. There is something about the woods that I find very relaxing. There are no city noises and you just get to relax for a few days. We go out to the woods every summer and explore. I was born and raised mostly in California and Oklahoma, so the woods are something extremely beautiful to me because there is not a whole lot of green scenery in either of those states!

What does true leadership mean to you?

To me, true leadership means never asking someone to do something that you wouldn’t do. You work right beside them and help your team grow, not put them down. A true leader looks out for their team’s best interest with the goal of helping them succeed without the fear of them becoming better than you someday.

What do you wish other people knew about our company?

I wish that people new how significant it is that our company listens to its employees and takes into consideration changes that are suggested. I have never worked for a company that has cared enough to initiate changes from their people. People should also know that if you work hard in this company, you will be recognized and showed appreciation. That is rare in most companies.