9 Up and Coming Portland Neighborhoods

The secret has been out of the bag for some time now, which is that Portland has become one of the “it” places to live in the country. The city ranked #10 in U.S. News and World Report’s latest survey of the Best Places to Live in the U.S. Portland continues to grow at a steady pace, with its population growing by 11.4% over the last decade. With all this growth, newcomers to the city face the challenge of finding affordable housing in desirable neighborhoods.  According to Redfin.com, the average home price in Portland is now at $540,000 and homes sat on the market for just 6 days on average.

With that in mind, we thought we would put together a list of the up-and-coming neighborhoods in Portland. 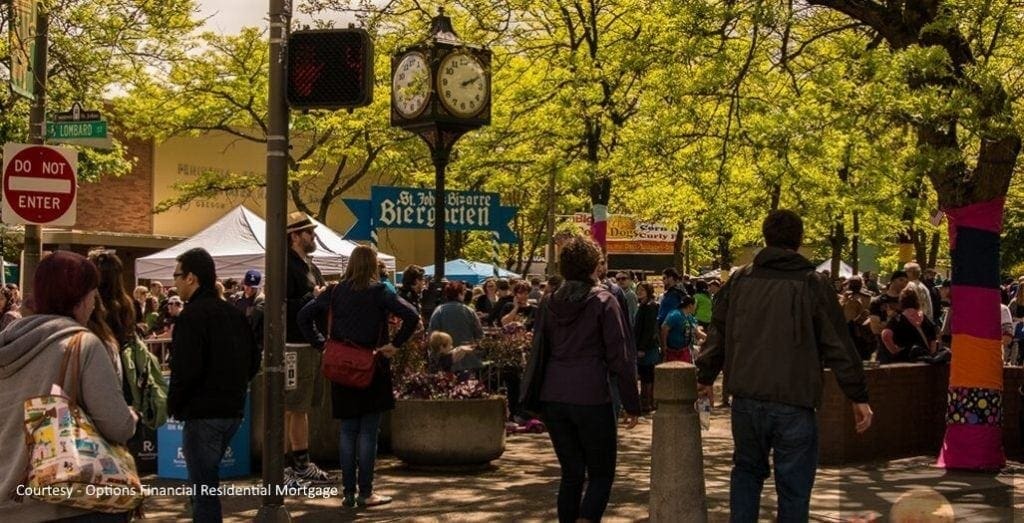 Located in North Portland on the east side of the Willamette River, St. Johns has a long and interesting history within the context of its role in the growth of Portland.  It’s one of the oldest areas in the city, dating back to 1865. Early on, the area was dominated by lumber mills, shipbuilding plants, and other manufacturing. This blue-collar makeup has always been a part of the town’s history, but with the growth of Portland, the neighborhood is seeing plenty of new development and an influx of young urbanites. The St. Johns downtown area features many new and upgraded restaurants, shops, and other businesses. McMenamins St Johns Theatre and Pub, one of the only remaining buildings from the 1905 Lewis and Clark Exposition is located here.  In the shadow of its famous St. Johns Bridge is Cathedral Park, a 23-acre park featuring walking and jogging paths, picnic tables, an outdoor stage, and a boat ramp/dock. In terms of education, St. Johns has two public elementary schools, including James John Elementary, named after the city’s founder, and Sitton Elementary. At the Northeast end of town is George Middle School and on the Eastside, is Roosevelt High School. In an effort to improve the safety of its residents, the St. Johns Neighborhood Association created SALT, the Safety and Livability Team, which meets monthly to discuss and implement plans to improve public safety and overall livability. 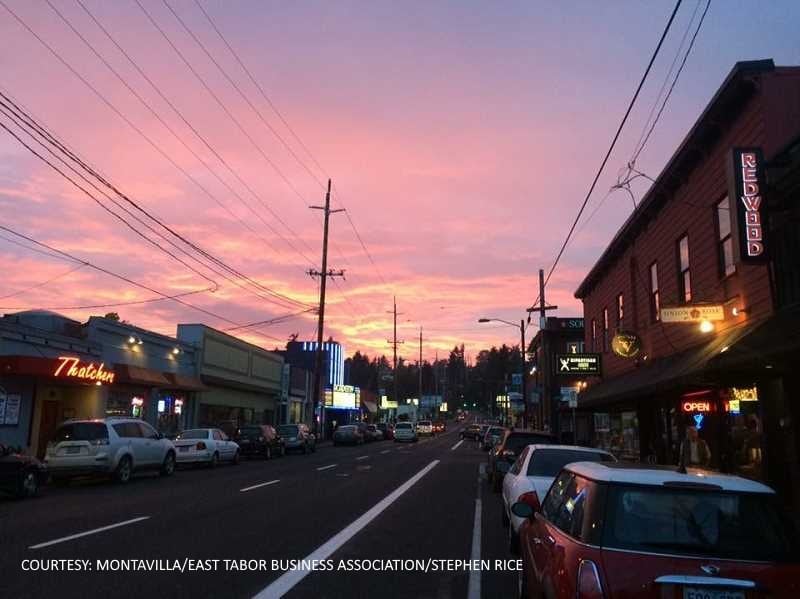 While most of the attention has been focused on the hip neighborhoods of Mt. Tabor, Laurelhurst, Sunnyside, and Richmond to the west, Montavilla is becoming quite the coveted area. New homes are going up left and right and the property values are coming up nicely for current homes. The Montavilla neighborhood is located in SE Portland, bordered on the north by Interstate 84, on the east by I-205, and on the south by Division St. It was recently named “Hot ‘hoods in the US: 10 neighborhoods you need to visit” by Lonely Planet.  The neighborhood is anchored by Stark Street running east-west through the center and features a variety of interesting restaurants, shops, and movie theatres. The Academy Theater is worth a visit. Built in 1948, the theater closed in the 70s but was restored in 2006. It now features food, beer, wine, and even babysitting. Schools in the area include Vestal K-8, Bridger K-8, and Multnomah University. The area once had a not-so-great reputation, but with an influx of young people and new business coming in, the neighborhood has been revitalized and is now a sought-after destination. While home prices have jumped up here like the rest of Portland, they haven’t yet reached the heights that the neighborhoods to the west have seen—yet. 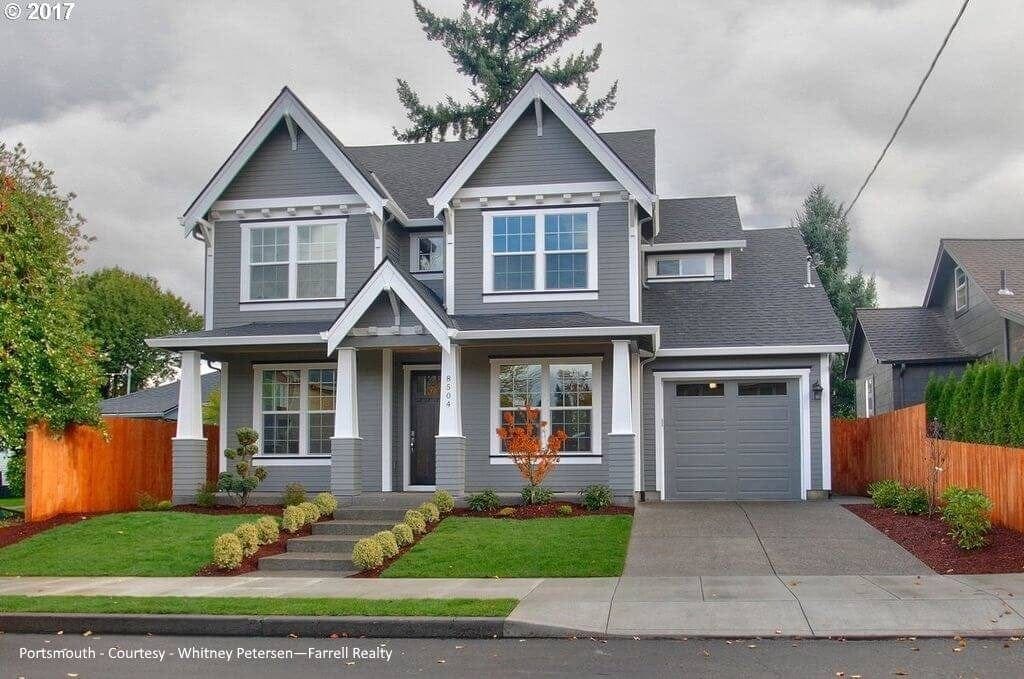 Another up-and-coming Portland neighborhood is Portsmouth. Named as such because it originally extended to the Columbia River, today Portsmouth is bordered by Columbia Boulevard to the north, Lombard Street to the south, and Chautauqua Boulevard to the east. Portsmouth was traditionally known as a working-class neighborhood, with its residents originally tied to the shipping industry on the Columbia River.  But today, Portsmouth is diverse both economically and ethnically. There has been an influx of new residents of different nationalities and socioeconomic backgrounds to the neighborhood. Along with this has come new home construction and remodeling of older homes.  However, with its distance from Portland proper, Portsmouth retains its quiet, relaxed feel. Most of the shopping and dining opportunities can be found on Lombard St. Schools include César Chávez K-8 School and the University of Portland, a private Catholic college located in University Park to the Southwest of Portsmouth. 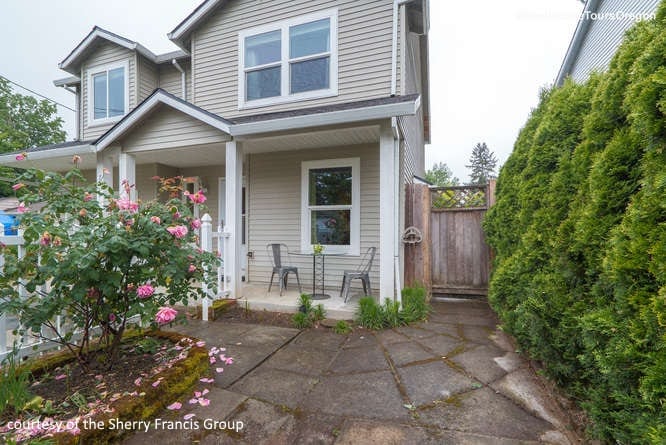 As the surrounding neighborhoods of Eastmoreland, Woodstock, and Sellwood price people out of the real estate market, a nearby alternative might be Brentwood-Darlington. This neighborhood in SE Portland is bordered on the west by the aforementioned Woodstock neighborhood, as well as Mount Scott-Arleta on the north, Lents neighborhood to the east, and the Multnomah County border to the south. Brentwood-Darlington is primarily residential, featuring homes of varying architectural design with the larger homes to the west and smaller to the east. At a median home price of only $309K, homes in this area are still a steal. But you might want to act fast as the neighborhood is forecast to increase by close to 4% over the next year. In terms of commercial development, a few, scattered local businesses inhabit the area, so most residents opt to go into Woodstock or Sellwood for their shopping and dining needs. Brentwood-Darlington still has a bit of a crime problem, especially toward SE 82nd, but this is changing for the better. It has an active neighborhood association that works to improve the area. In addition, Brentwood-Darlington has a number of excellent parks including Brentwood Park and Community Garden, the neighborhood’s largest park. 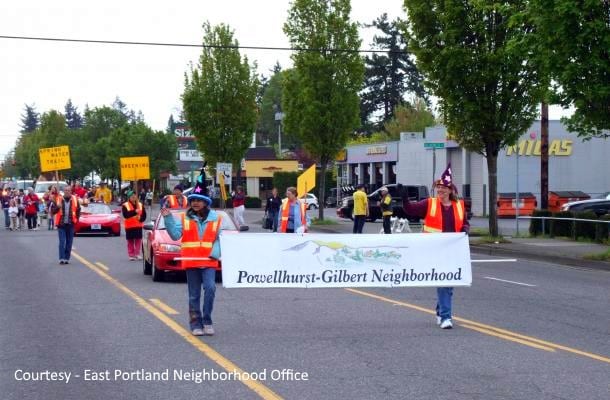 Powellhurst-Gilbert is another up-and-coming neighborhood located in outer Southeast Portland.  The neighborhood is framed by Division St on the north, I-205 on the west, and Foster Road on the south. The neighborhood has seen its real estate prices rise as demand for SE Portland homes increases and buyers are priced out of the South Tabor and Montavilla neighborhoods to the west.

The make-up of the neighborhood is quite diverse both racially and ethnically, with young families comprising the bulk of the population. Residents say that they enjoy the fact that they have easy access to nature since the neighborhood has the Kelly Butte Natural area within its boundaries and is adjacent to the large Powell Butte Nature Park to its east. Homes here are of modest construction, owing to the generally blue-collar resident makeup. However, some new construction is occurring with townhouses and single-family homes popping up around the neighborhood.

There are a few different parts of the neighborhood with shopping and dining opportunities including along Division St. to the north and Powell Blvd. running east-west through the center of the neighborhood. Residents also describe the neighborhood as having a very good community spirit, where people are friendly and welcoming. While low-level crimes such as auto theft continue to be an issue, the area has a very active neighborhood association (Powell-Gilbert Neighborhood Association) that has improved the area through a number of efforts including a graffiti clean-up campaign, the launch of the East Portland Exposition, a festival promoting neighborhood businesses, and the creation of small neighbor grants, including one for immigrant outreach and one for youth internships. It was named 2009 Spirit of Portland Neighborhood of the Year. 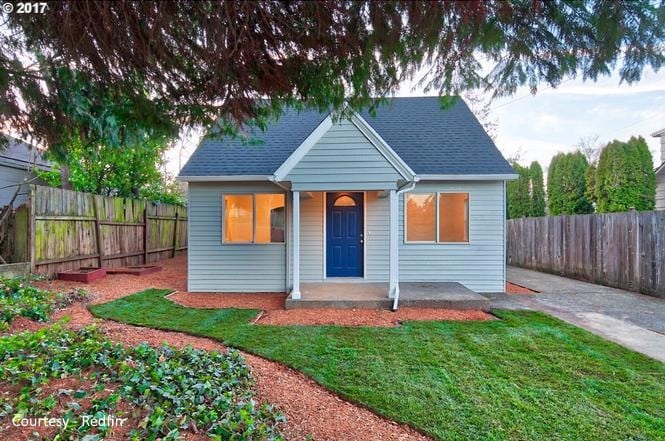 If you don’t mind living a little further east of central Portland, Hazelwood might be a great place for you to look for your next home. Property values are still incredibly low (under $300k as of this writing), but as you can see from the above statistics, they are on the rise. In fact, they have some of the highest growth in the Portland Metro. The Hazelwood neighborhood is framed on the west by Hwy I-205 and the east by SE 148th Ave. On the north its boundary is NE Halsey St., separating it from the Parkrose Heights neighborhood. And on the south, is an uneven border that extends to SE Division St.

As one of Portland’s largest neighborhoods, a great deal of Hazelwood includes the Gateway Regional Center Urban Renewal Area, which has the goal of reducing crime, enhancing business growth, and improving livability, recreational opportunities, and transportation.

Hazelwood has been noted for its quiet, tree-lined streets, with homes that are set back from sidewalks and large, spacious lots. The homes themselves are a mix of ranch- and cap code-style homes from the 50s and 60s. People looking for starter homes will find many to choose from here. As with other neighborhoods, a recent trend is the appearance of townhouses and multi-story condo and apartment complexes. One major advantage Hazelwood has is its access to mass transit. The TriMet Max Blue line runs east-west through the neighborhood along Burnside St. There are several commercial areas in the area that provide shopping opportunities for residents including the Gateway Shopping Center and Mall 205.

Other Portland Neighborhoods to Keep an Eye On

ParkRose Heights, tucked into the corner made by the conjunction of Hwy I-84 and I-205, is the fastest growing neighborhood in Portland with an 18.3% year-on-year growth spurt. As people are forced east by rising prices, they are finding more affordable housing here, with the average price currently at $426,031. Convenient shopping and dining options are now nearby with the addition of Cascade Station, an expansive shopping area near the airport anchored by IKEA, Target, along with other retailers and restaurants.

This neighborhood, located in SE Portland, is about 3 miles east of I-205 and borders the city of Gresham to the east and the neighborhoods of Powellhurst-Gilbert and Mill Park to the west. Centennial has a current median home value of $389,620 and has seen its home values grow 18.1% in the last year. The area has multiple parks, an active neighborhood association, and very low prices that are attracting first-time home buyers. The main shopping district is along Division Street with major retailers including Fred Meyer. Access to light rail is just north of the neighborhood along E. Burnside St, making getting into the city easy.

Lents home values grew at a 16.9% clip last year. The neighborhood is in southeast Portland is bordered by Highway 26 (SE Powell Bvd.) to the north and SE 82nd to the west. Highway I-205 bisects north-south through the neighborhood making access easy. The average price is still low at $393,324. A ton of construction is occurring, especially in the area of 92nd and Foster Rd with the installation of Oliver Station and Lents Commons, mixed unit developments that will feature apartments, retail, and dining.