If you’re thinking about moving to Spokane, you’ve most likely heard what an amazing city it is to live in. After all, the city was voted one of the Top 100 Places to Live by Livability.com, coming in at 49. One of the important decisions you’ll need to make is what part of Spokane you want to live in. There are many great neighborhoods in and around the city that are very enticing for different reasons. Some neighborhoods have a central business district or “main street” whereas others are more spread out. Some neighborhoods feature homes that are all of a particular age or architecture, whereas others are mixed. And some neighborhoods are densely packed whereas others have plenty of room between you and your neighbor.

While there are upwards of 45 Spokane-area neighborhoods, we’ve done the research and come up with what we think are the 7 Best Neighborhoods in Spokane. 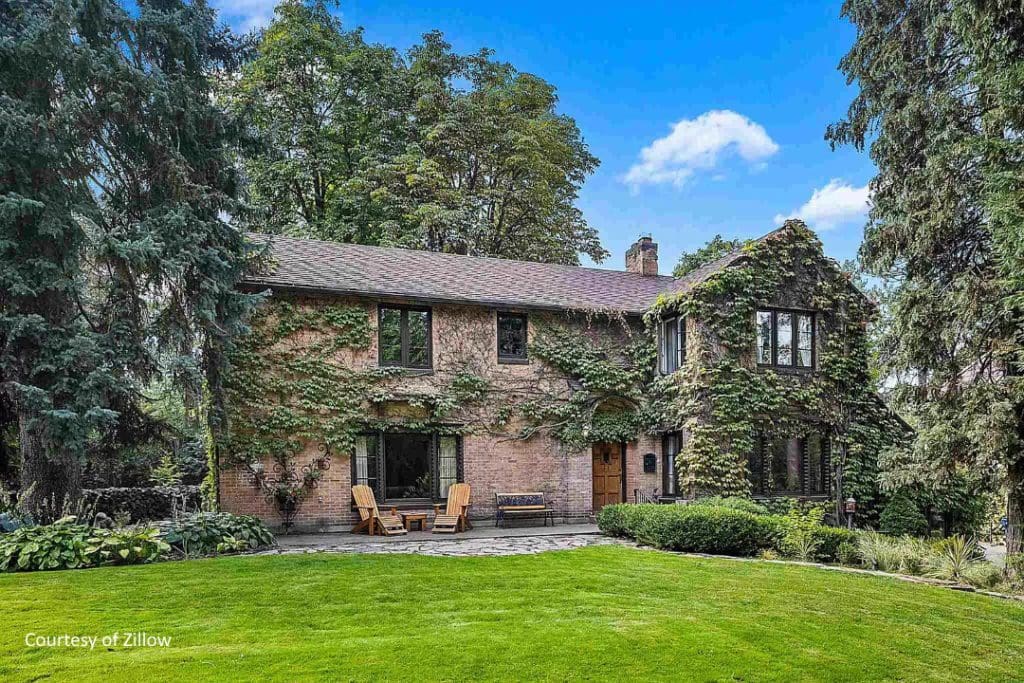 If money is no object, then Manito-Cannon Hill is where you can find some of Spokane’s most expensive homes. The neighborhood is bordered on the west by S Cedar Street, to the north by 13th Avenue; to the south by 29th Avenue, and to the east by S Grand Boulevard. Two main parks are the mainstays of the neighborhood including its namesake Manito Park, a huge 90-acre park. We could write a whole separate article about this place, but suffice to say it’s magnificent and includes various paths, gardens, picnic areas, and the Gaiser Conservatory. Homes here are a mix of styles including craftsman bungalows, Victorians, and 50s ramblers. 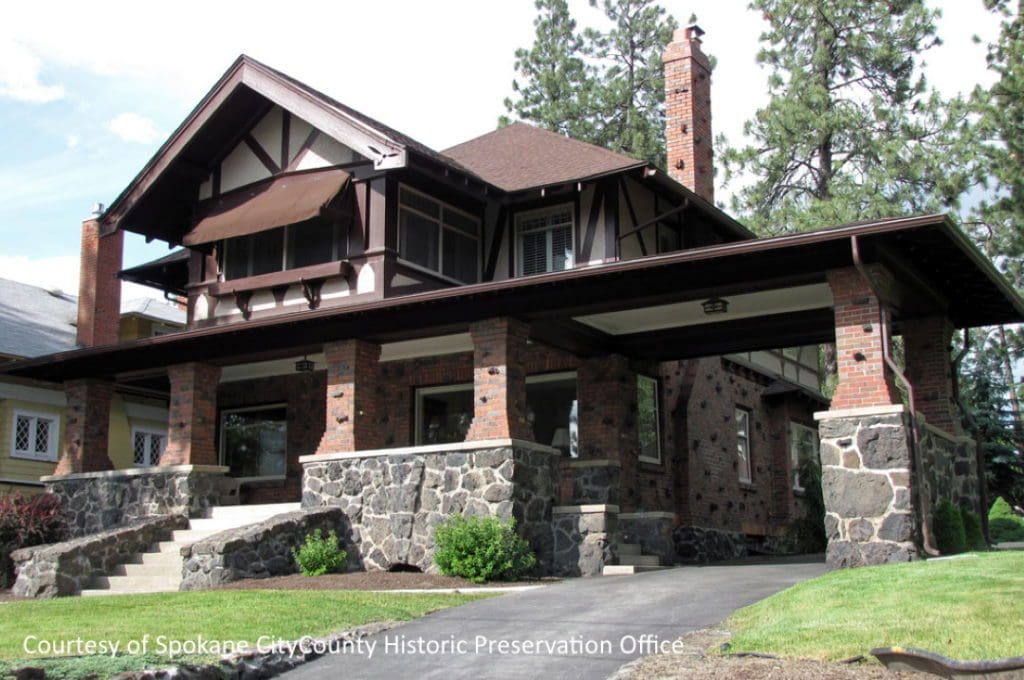 The neighborhood of Cliff-Cannon is the 2nd oldest in Spokane and some would say the most impressive. The neighborhood has something for everyone. Beautiful, old homes, four parks, three schools, four hospitals and several neighborhood centers. Because of its age, many of the neighborhood streets are lined with large stately trees. The Spokane Farmer’s Market is held here every Saturday May through October. There is also a very active neighborhood association that meets the first Tuesday of every month. Cliff Cannon is south of downtown Spokane and its borders include I-90 to the north, S Cowley Street to the east, W 16th Ave and S Cedar St to the south, and West Latah Creek Bluff to the west.

Browne’s Addition is at the top of many lists when it comes to the best neighborhoods in Spokane. It’s understandable. In Spokane’s oldest neighborhood, you’ll find historic homes and apartment buildings, museums, shops and restaurants, and the city’s first park, Coeur d’Alene Park, built in 1891. Browne’s Addition has gone through many iterations since its platting back in 1883. The first residents built gorgeous Victorian and Queen Anne-style homes. In the late 1890s and into the new century, successful entrepreneurs in the region’s lumber and mining industries built homes in the Colonial, Tudor Revival, Neoclassical, Craftsman, and Mission Revival styles. But the neighborhood hit a rough patch from the depression to the 1980s as residences were demolished to make way for commercial businesses and smaller homes. The area became rundown and had a crime problem. In the 90s, a group of residents formed a steering committee and were able to use city dollars and federal funding to turn the neighborhood around. Fast forward to 2009, and the neighborhood was named one the 10 Best in the U.S. by the American Planning Association. You’ll find that many historic homes and buildings have been renovated to their former glory. There is also an active neighborhood association. 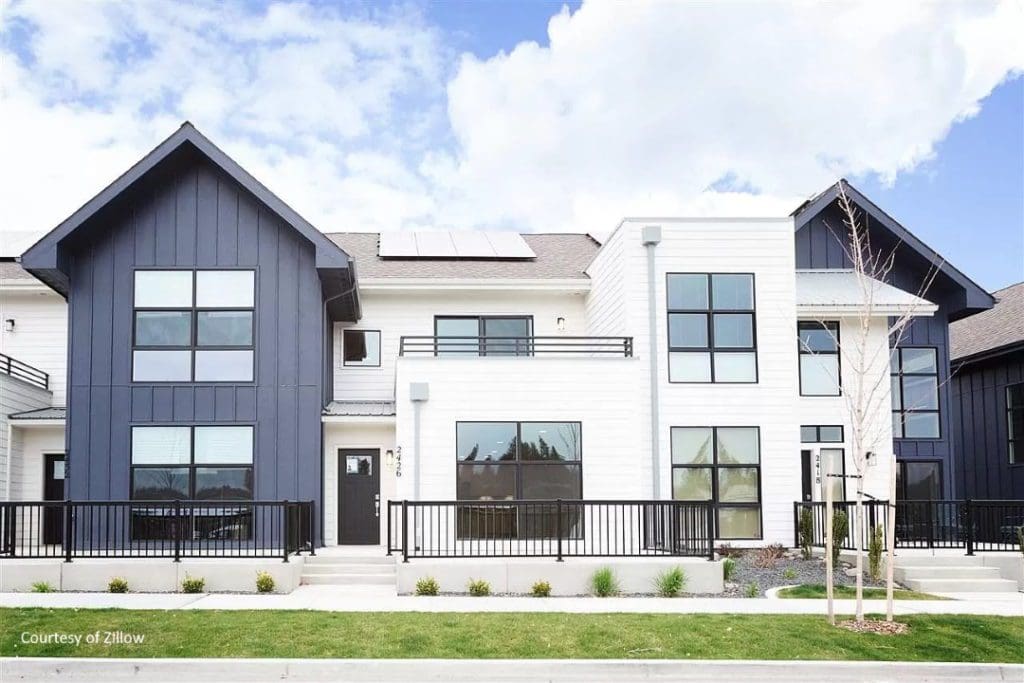 The West Central / Kendall Yards neighborhood is located just north of the Spokane River and has a long and interesting past. The Union Pacific and Northern Pacific Railroads originally had their rails run through this area. By the 1930s, the neighborhood of West Central was established with middle-class families moving to the area. But as the decades wore on, the railroad lines no longer went through the area and by the 70s the neighborhood had become known as “Felony Flats” for its crime and drug problems. But this started to change about 30 years ago after a horrific incident in which two young girls were snatched while walking to the gas station. The community rallied around this incident and created a block watch program, which lead to Spokane’s first Cop Shop. Residents started looking for crime and reporting it. This led to neighborhood cleanups to change the look of the area. With the development known as Kendall Yards in 2010, a mixed-use development including 350 rental units, 250 homes, and 150,000 sq. ft. of commercial space. The development has sparked increased property values throughout the neighborhood. 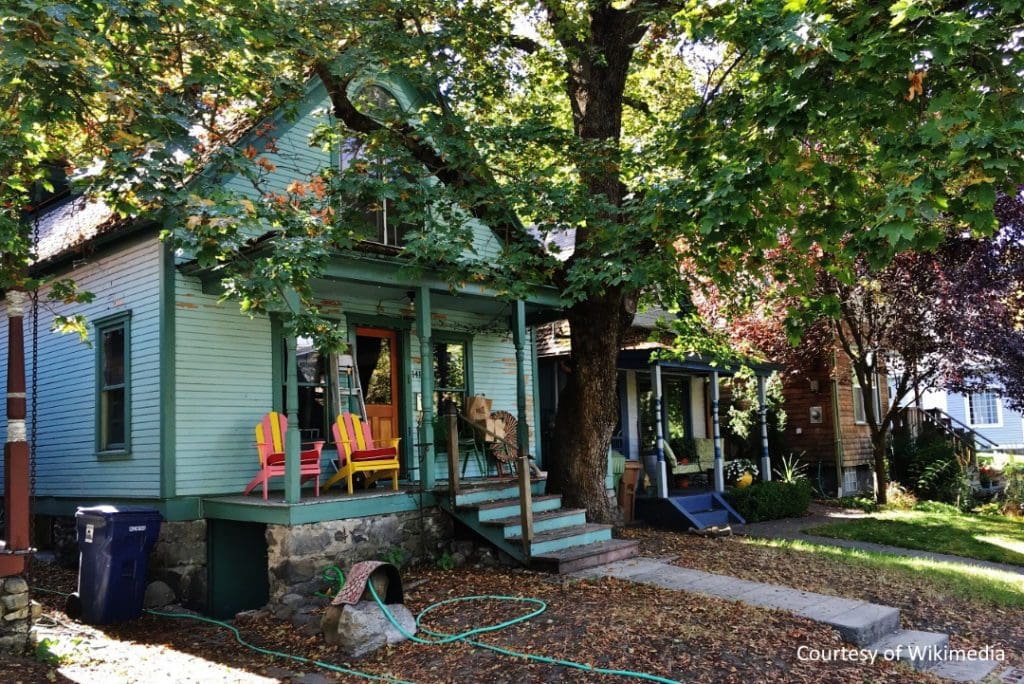 Peaceful Valley is one of the more unique neighborhoods in Spokane, not only in its varied home styles, but by its topography. Peaceful Valley is separated from the rest of Spokane by steep bluffs leading down to the Spokane River, which gives the area a secluded feeling. It’s hard to believe the neighborhood is just west of downtown Spokane. Homes here run the gambit from turn of the century Queen Anne Sticks, cabins, and brick homes, to newer contemporary homes and townhouses. There are very few if any businesses in the area, so residents must trek into downtown Spokane or neighboring areas for groceries and shopping. Redband Park (previously named to Glover Field Park) is the sole park in the area and includes a baseball diamond and picnic tables. 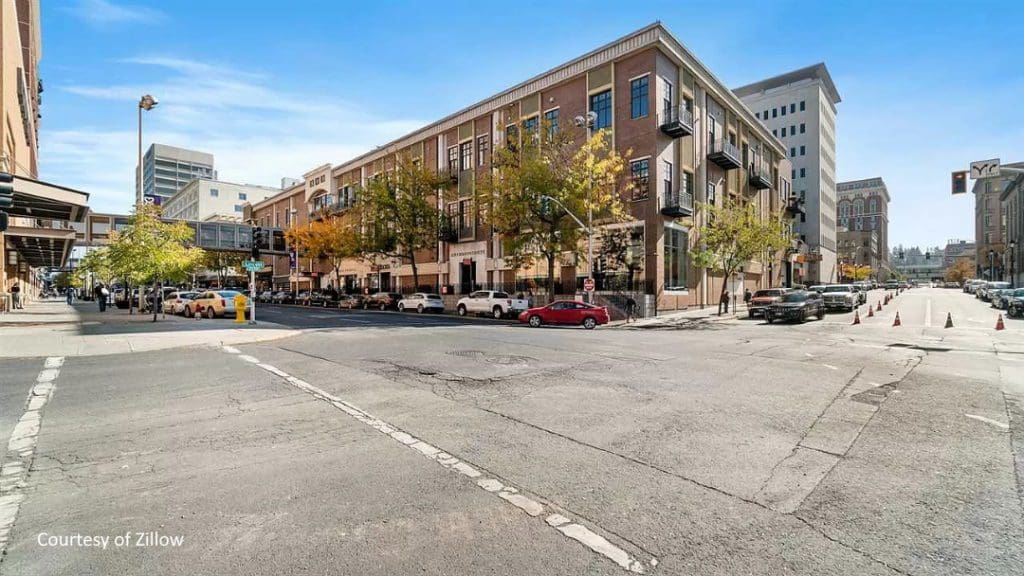 Downtown Spokane is actually part of the neighborhood called Riverside. The official borders include Hwy 2 to the south, South Division Street to the east, W Boone Ave to the north, and a combination of N. Monroe, W Main Ave, N Cedar Ave, N Maple St connecting to the BNSF Railroad line to the west.

Here, you’ll find a city center that has been revitalized to offer the kinds of businesses that draw residents to the neighborhood. New upscale shops, restaurants, bars, and coffee shops co-exist with newly renovated apartment and condo buildings. River Park Square, a shopping mall and entertainment complex in the center of downtown, was revamped in 1999 and now is a centerpiece attraction for visitors and residents alike.

Riverfront Park, located in the middle of the Spokane River, is a massive 100-acre park that was originally renovated for the 1974 World’s Fair in Spokane. After the fair, it was converted to Riverfront Park and has become the center of many of Spokane’s celebrations, including the big annual sports event, the Lilac Bloomsday Run. Other attractions are the magnificent Spokane Falls, the Looff Carrousel, the Expo Pavillion, and Centennial Trail.

If you’re looking for concerts, you might try the Martin Woldson Theater at the Fox to listen to the Spokane Symphony or Bing Crosby Theater, featuring concerts from famous acts.

Real estate here is super-hot right now. In fact, as of this writing I could only find 2 properties for sale – one lot, and one 3-bedroom condo going for $2.5 million. The average home value here is roughly $375,000, but this is most likely a gross under-evaluation given the current market.

If you like to be in the center of it all with access to a plethora of entertainment options, downtown Spokane is a great choice. 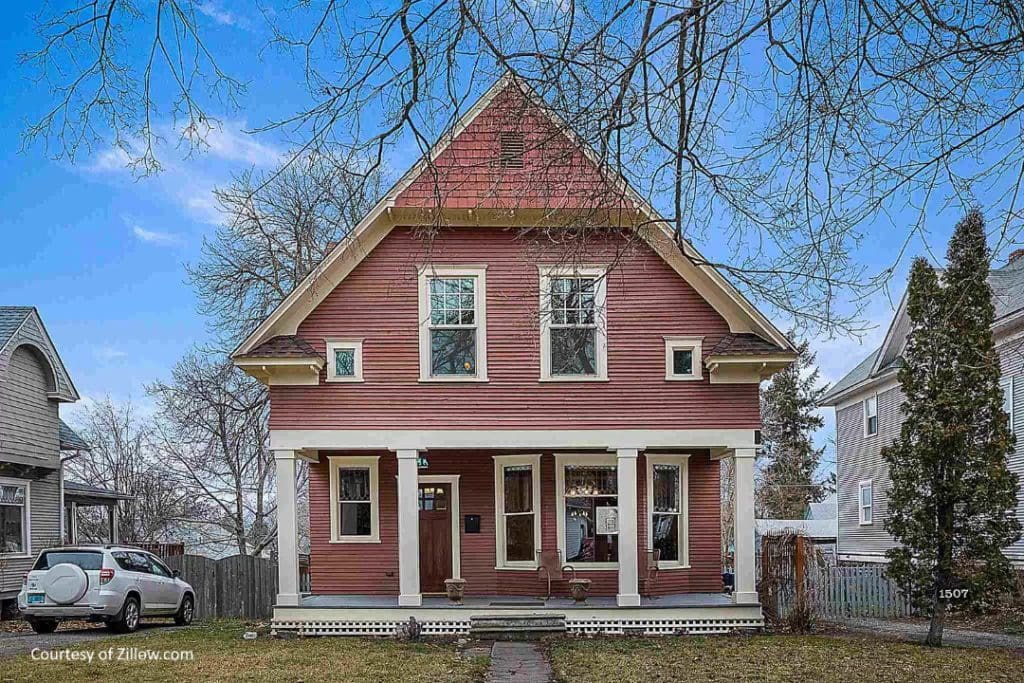 South Perry is another of the Spokane neighborhoods that previously didn’t have a great reputation. But gentrification and renewal have supplanted rundown convenience stores with hipster restaurants and shops. The neighborhood has a defined main street along S Perry St where much of this redevelopment has taken place. Here, you can find stores selling vintage items, women’s clothing, and baked goods, as well as spas, brewpubs, and other businesses.  In the southwest corner of the neighborhood, you can find a great restaurant, Wisconsinburger, a chic eatery with knotty pine paneling and serving specialty burgers and craft beers.

Grant Park is the major park in the neighborhood. It encompasses almost 13 acres and the amenities include a shelter, two playground areas, baseball field, community garden, basketball and tennis courts, a horseshoe pit, and a splash pad. A restroom is on site as well.

Homes here are primarily smaller bungalows with front porches, with a smattering of craftsman, Victorian, and ranch home styles.

The neighborhood is located just south of I-5 along E 5th Ave. Its western border is S. Sherman St and S Southeast Blvd. The southern border is E 17th Ave, and the eastern border is approximately along S Crestline St.

As you can see, there are some exceptional neighborhoods in Spokane. And we haven’t even touched the surface. There are several other parts of town that offer great homes, parks, shops, and restaurants. If you end up moving to Spokane and need temporary or permanent storage, visit Storage Solutions. They have five high quality self-storage facilities throughout the Spokane area.