If you are contemplating moving to Reno, you’re not alone. The city (Nevada’s third-largest after Las Vegas and Henderson) is on a growth spurt, having grown by almost 21% in the last 10 years. People are flocking to Reno for a multitude of reasons including job opportunities, low cost of living, and climate. With 29 companies moving to Reno or expanding here, this has added 48,000 new jobs in the last five years. The cost of living, although up 2.5% from last year, is only 1.8% higher than the national average and well below big cities such as Oakland, Dallas, and Washington DC. And for some, the weather in Reno is the reason they move here. Reno ranks in the top 10 sunniest places in the U.S. with 252 sunny days per year. Let’s not forget Reno’s entertainment. Reno is third in the nation for the number of casinos in a city with its current number at 23. And these are some of the nicest gambling establishments to be found anywhere. A case in point is the Silver Legacy and its 1700 rooms. If gambling isn’t your thing, visit the Nevada Museum of Art, the Fleischmann Planetarium, or the National Automobile Museum. For something outdoors, you can head down to Lake Tahoe just 44 minutes away for some skiing at Northstar California, boating, or sunbathing on Incline Beach.

Part of moving to Reno is determining what part of town you want to live in. Reno has a number of fantastic neighborhoods, each with its own set of qualities to appeal to your specific interests. It all depends on what you value the most, whether that’s the schools, proximity to shopping, access to nature, or the quality of homes. We’ve compiled our list with some facts to help you decide which one you think is the best neighborhood in Reno for you. The Riverwalk District in downtown Reno was conceived in 1990 as a way to bring attention to the area along the Truckee River running through the city. Today, you’ll find it to be the perfect way to get a beautiful walk in as well as visit a plethora of shops, restaurants, galleries, coffeehouses, bars, and more. The district also features their Monthly Wine Walk on the third Saturday of every month, where you can sample a glass of wine while you shop. The neighborhood is relatively small and its boundaries include W 2nd Street to the north, Ralston Street on the west, Lake Street on the east, and the Truckee River Walk making up its southern border. Condos in multi-story buildings dotted throughout the area are the primary method of housing in the Riverwalk District. 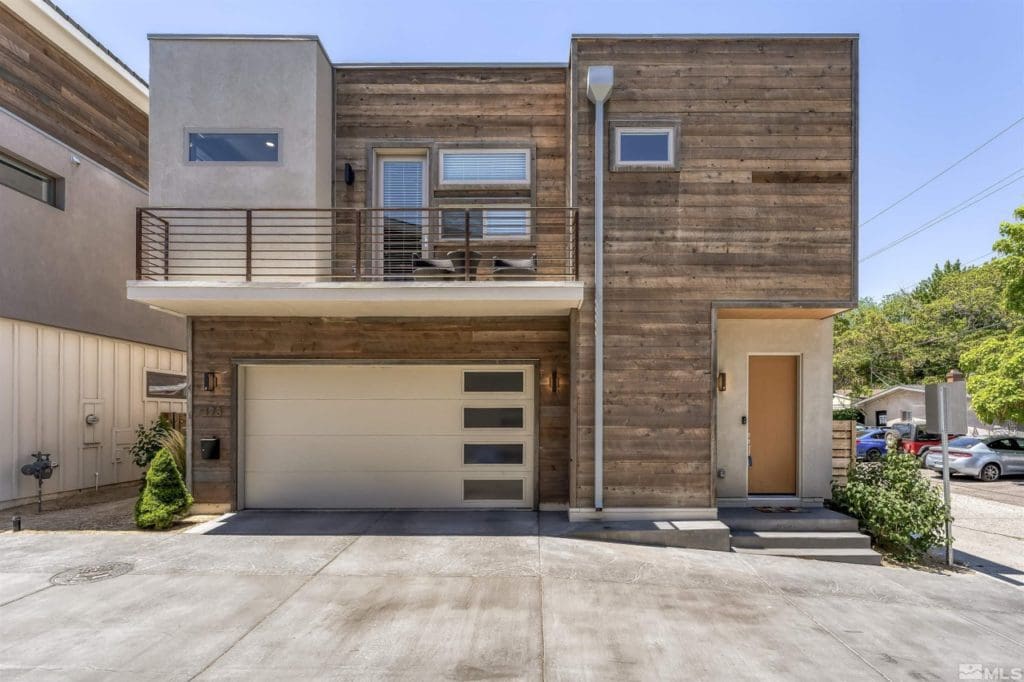 The Midtown neighborhood is located south of downtown Reno, with its north end along E Liberty St, its eastern border along Holcomb Ave, the western border along Plumas St, and its southern border along Plumb Ln. However, the main attraction is S Virginia Ave with its chic cafes, great restaurants like Chuy’s Mexican Kitchen, vintage clothing shops, hip bars, and other establishments that draw people toward the area, making it the place to be in town. Homes here are a mix of newer townhome complexes and older homes built from the 20s and 50s. Homes recently sold have ranged from $900k to as low as $225k. Damonte Ranch is a master planned community in South Reno that was originally created by Louis Damonte, an Italian immigrant that farmed alfalfa and cattle. The new development incorporates 2000 acres of land with a mix of homes and industrial parks as well as several greenbelts, a community park, winding hiking and bike trails. Within the neighborhood are many developments with varying levels of poshness. Some are gated for extra exclusiveness. Homes range from low $600k to $1.65M, all of which have been built in the last 10 years. Plentiful shopping and restaurant options can be found throughout the neighborhood. The neighborhood borders are loosely defined as S. Virginia Street on the west and Rio Wrangler Parkway on the east. Caughlin Ranch is located southwest of Reno, just west of Hwy 659 (S McCarran Blvd). This master planned community was created starting in 1984 when developers purchased the land from the Caughlin family. The design of the community is one that placed nature front and center. 1,200 of the 2,400 acres is dedicated to open space, which includes 26 ponds, four major parks, iconic cottonwood trees, and 24 miles of trails and paths. There are a total of 30 subdivisions within the ranch. The development features Caughlin Athletic Club, a membership-based club that offers tennis, swimming, workout facilities, physical therapy, dance classes, and beach bar & bistro. Homes here range from $790k to $2.0M and range in size from 3,000 sq. ft. to 7,000 sq. ft. If you are looking for some of the nicest (and priciest) properties in the Reno, NV area, you should take a look at the Arrowcreek neighborhood. This gated, 3,200-acre master-planned community is located in Southwest Reno about 13 miles south of downtown along Arrowcreek Parkway. The centerpiece of the neighborhood are the two 18-hole golf courses that make up The Club at Arrowcreek. Many of the homes here back up to one of the course holes, or have views of the mountains or downtown Reno.  There is also a Resident’s Center featuring three swimming pools, a coffee bar, year-round hot tub, tennis, pickleball, and basketball courts. There are just under 1,100 homes in the neighborhood, with prices starting at $800k and going up to $3.5M. Residents have access to some of the most highly rated schools in the Reno area. Galena High School is across Thomas Creek Rd off of Mt Rose Hwy. Hunsberger Elementary School is right outside the gates to Arrowcreek and just a few blocks east is brand-new Melanie Lenz Middle School.

The Newlands Historic District is one of the oldest neighborhoods in Reno, and was recently placed on the National Register of Historic Places. The neighborhood was created as part of a planned development on the part of the Newland Company and its founder Francis Newland, and features diverse design styles from some of the regions most celebrated architects in accordance with the principles of the City Beautiful movement. The district’s boundary is framed by the Truckee River on the north, Monroe Street on the south, Arlington Avenue on the east, and Keystone Avenue, California Avenue and Sharon Way on the west. The neighborhood quickly became one of Reno’s most prominent, with homes being built from the early 1900s up to 1965. Styles include tudor, colonial, craftsman, ranch, contemporary, and others. Fieldcreek Ranch is a neighborhood in southwest Reno. The neighborhood was developed in the early 90s by Filberto Ferroni and features custom-built homes with lots from one-half to one-acre in size. At the center of the neighborhood is the exclusive Fairways at Fieldcreek Ranch, a private, 73-acre gated community featuring 65 large homes with prices ranging from $1.4M to $3.8M and homes up to 8,600 sq ft. A focal point within the neighborhood is the Wolf Run Golf Club, a 7,100-yard private golf course that is home to the University of Nevada-Reno’s golf team. The neighborhood is bordered by Zolezzi Lane to the north, Arrowcreek Parkway to the south, Thomas Creek Road to the west, and Silver Creek Road to the east. Residents here enjoy great views of the Virginia Range mountains as well as downtown Reno. The community offers numerous community events including social gathers spring and fall cleanup. Nearby, you can find Ellen’s Park, featuring a playground, two tennis courts, and a basketball court. Northwest Reno isn’t really a neighborhood. It’s more of an area, but is ranked #1 in Reno for livability by AreaVibes.com. They arrive at a rank by looking at a neighborhood’s amenities, cost of living, crime, employment, housing, schools, and user ratings. Homes here are typically single family, built between 1940 and 1990. This location is in high demand for UNR attendees. Homes range from 988 sq ft to over 2000 sq ft, with 3 to 5 bedrooms.

As we said above, Reno has now become a hot spot for people and the real estate values are reflecting that. The city and its neighborhoods have a lot going for them and hopefully this guide will help you choose the right one for you. If you do decide to move to Reno and need a place to temporarily store your belongings, consider one of our Reno self-storage locations.