If you’re thinking about moving to Federal Way, the city has a lot to offer. With its location along the Puget Sound Inlet, and its proximity to both Seattle and Tacoma, access to natural wonders and big-city entertainment is within easy reach. The city is bordered on the east by I-5 with its western border being the Sound. The city has fantastic attractions including Wild Waves and Enchanted Village, the largest theme park in Washington. Other attractions include the Pacific Bonsai Museum, the Rhododendron Species Botanical Garden, and others.

Federal Way has a number of great neighborhoods to choose from. Each has something to offer people relocating to Federal Way and price points that run from moderate to expensive. We’ve done our research and come up with what we think are the 7 best Federal Way neighborhoods. Here they are. 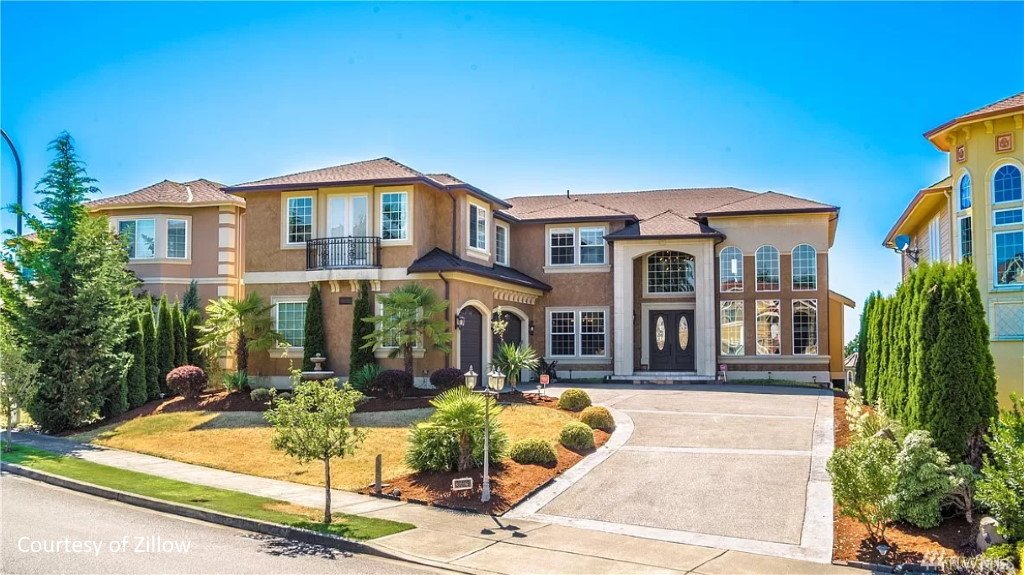 The Adelaide neighborhood is located in the northern part of Federal Way. It’s one of the larger neighborhoods in the city and is bordered on the west by Hwy 509, on the north by the Puget Sound, on the east by 8th Ave S, and on the south by SW Dash Point Rd. The neighborhood is primarily residential with a small retail area in the south of the neighborhood named Dash Pointe Village. The strip mall contains several small businesses offering hair styling, a veterinary hospital, a fitness center, and assorted restaurants. The Adelaide neighborhood has quite a bit of forested land, with large patches of wilderness to the southwest along Hwy 509 and near its western border with the neighborhood of Lakota. Homes here have an average sale price of $517,872. which is up 15.6% from last year. Most homes are mostly single-family, built in the 1960s and 70s with some being built in the 80s, 90s, and 2000s. The homes along the Sound are typically the most expensive. There is also some shared living (townhomes and apartments) in the area. There is one school in the neighborhood, which is Adelaide Elementary School, and the area has one park, Adelaide Park, offering Natural Area, Picnic Area, Play Area, and Walking Trail. 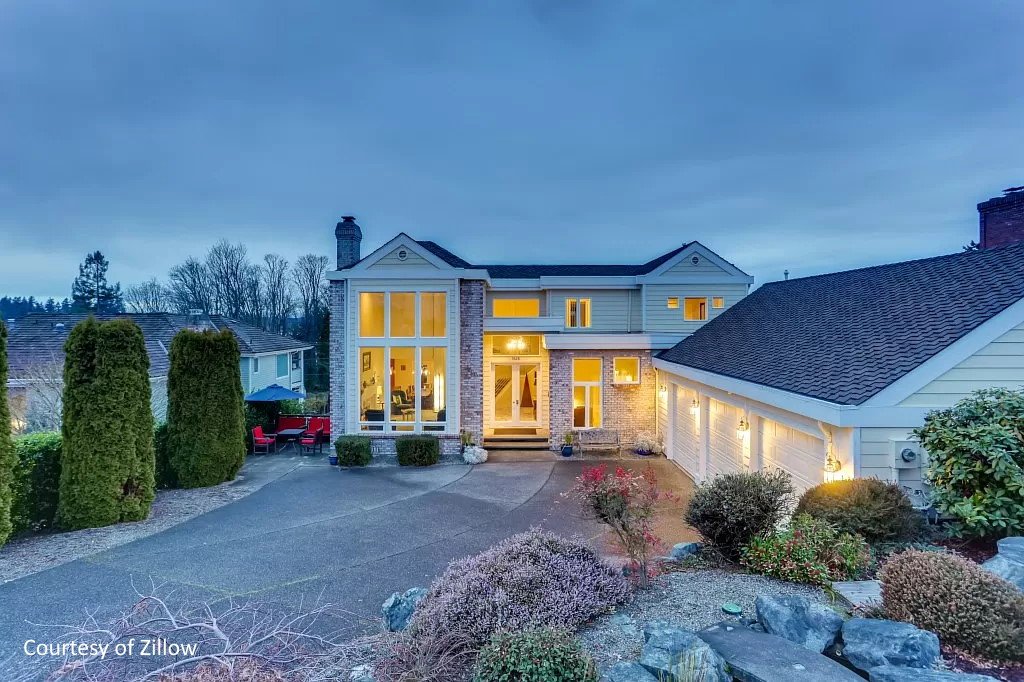 Twin Lakes is a triangular-shaped neighborhood located in the northwest section of Federal Way. It’s bordered by Puget Sound’s Dumas Bay on the north, 21st Ave SW on the east, SW 356th St to the south, and Tacoma along its southwest border. A centerpiece of the neighborhood is Dash Point State Park, a 461-acre park offering a fantastic beach for swimming, fishing, and surfing, 11 miles of hiking trails, 8 miles of biking trails, a sizeable campground with 141 campsites and cabins for rent, and two covered picnic shelters. Twin lakes gets its name from the two lakes within the neighborhood—Lake Lorene and Lake Jeane. Next to the lakes is the Twin Lakes Golf and Country Club.

The majority of homes in Twin Lakes were built between 1960 and 1980 with the ranch and split-level designs being most prevalent. Newer homes built after 1990 are located in the south and southwest of the neighborhood. There are some townhouses, condos, and apartments throughout the neighborhood as well. Bayview Country Estates near the Sound has the neighborhood’s most expensive homes averaging from $900,000 to $1.1 million.

Schools here include Decatur High School, and three elementary schools spread out among this large neighborhood. 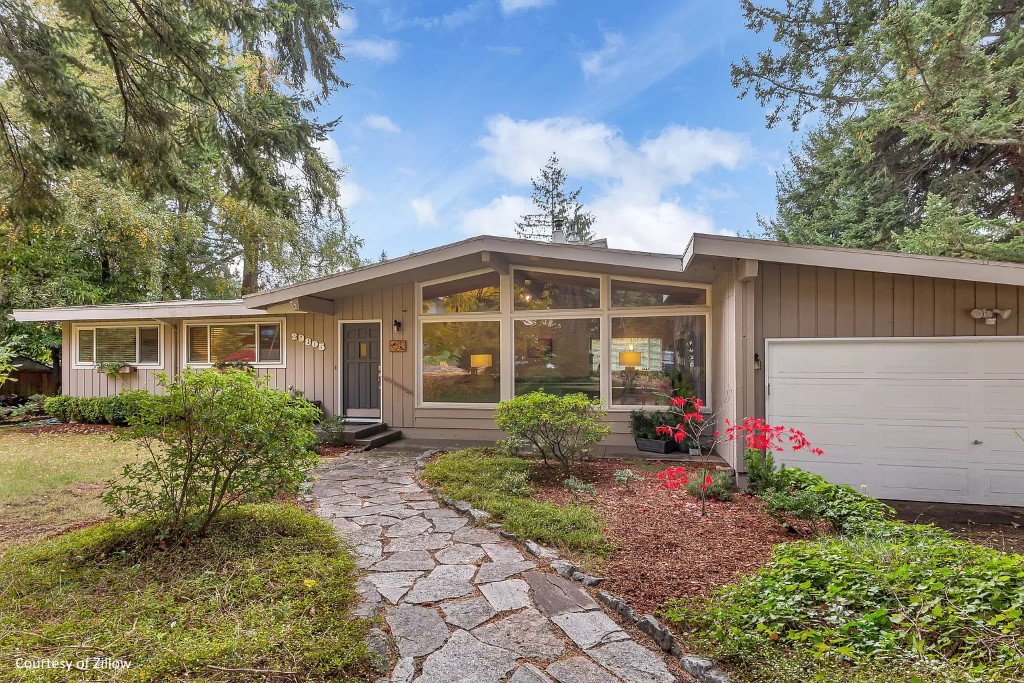 Marine Hill Neighborhood is located in the north part of Federal Way, adjacent to the Redondo neighborhood of Des Moines to the north. The western border is 1st Ave S, the southern border is Hwy 509, and the eastern border is Redondo Way S reaching all the way to Hwy 99. Marine Hill is one of the smaller neighborhoods in Federal Way, but it’s got something for everyone. The centerpiece of the neighborhood is PowellsWood Garden, a 3-acre garden located within another 35 acres of native successional forest. The garden contains a house as well as several different types of northwest gardens including Woodland Garden, Shade Garden, Spring Garden, Entry Garden, and House Garden. The property has great walking trails as well.

Homes here have varied architectural stylings with abundant ranch, mid-century modern, split-level, and some contemporary. Recent sales reach up to $1.25 million, but the average is in the low $700,000s.

There is one school in the neighborhood, Nautilus Elementary School, a K-8 school. For restaurants, you’ll have to go just east out of the neighborhood to Hwy 99 for a variety of fares. 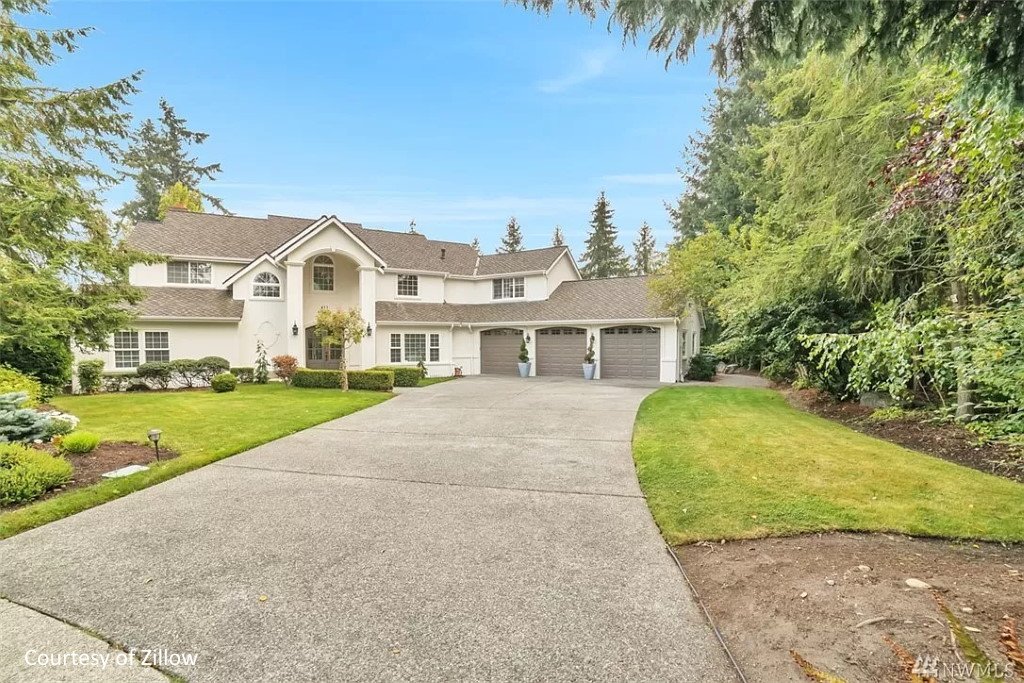 Campus Highlands neighborhood is located in the center of Federal Way with its borders consisting of SW 356th St to the south, 7th Ave SW/9th Pl SW/12th Ave SW to the west, the BPA Trail to the north, and SW Campus Drive to the east. Most homes here were built in the 1980s and 1990s and are of the two-story, cape cod, or colonial style. The most expensive house in the neighborhood is $1.4M and the least expensive is $330k. There are also a few apartments including the Encore Apartment Homes.

Shopping can be found along SW Campus Drive with grocery stores such as WinCo Foods, restaurants including IHOP, and Starbucks Coffee located here.

The BPA Trail (Bonneville Power Administration) runs through the north end of the neighborhood for a half-mile providing residents with a great place to walk and bike.  While not technically in the neighborhood, the Weyerhaeuser King County Aquatic Center offers an Olympic-sized pool, 25 x 15 recreational pool, and banquet hall.

The Buenna neighborhood is just to the east of the Adelaide neighborhood and is similar in dimension. Puget Sound’s Poverty Bay encompasses its northern perimeter. 12th Ave SW is on the west, 304th/305th St to the south, and 1st Ave S is on the eastern border.

Most homes here were built between the 60s and 80s, with these being the typical style of the time – ranch design. There are also a few dozen homes built between 1990 and 2000 that vary in design from cap cod to colonial with some contemporary as well. The current leader price-wise is a home valued at $1.77M featuring 4 bedrooms, 3.75 baths, and 4,012 sq. ft. The average price is $634k, with the homes averaging $264 per sq. ft.

The neighborhood itself is almost all residential so there are no shopping areas located here. For schools, residents must go to either Lake Grove or Lakota elementary schools, Lakota Middle School, and Federal Way High School. 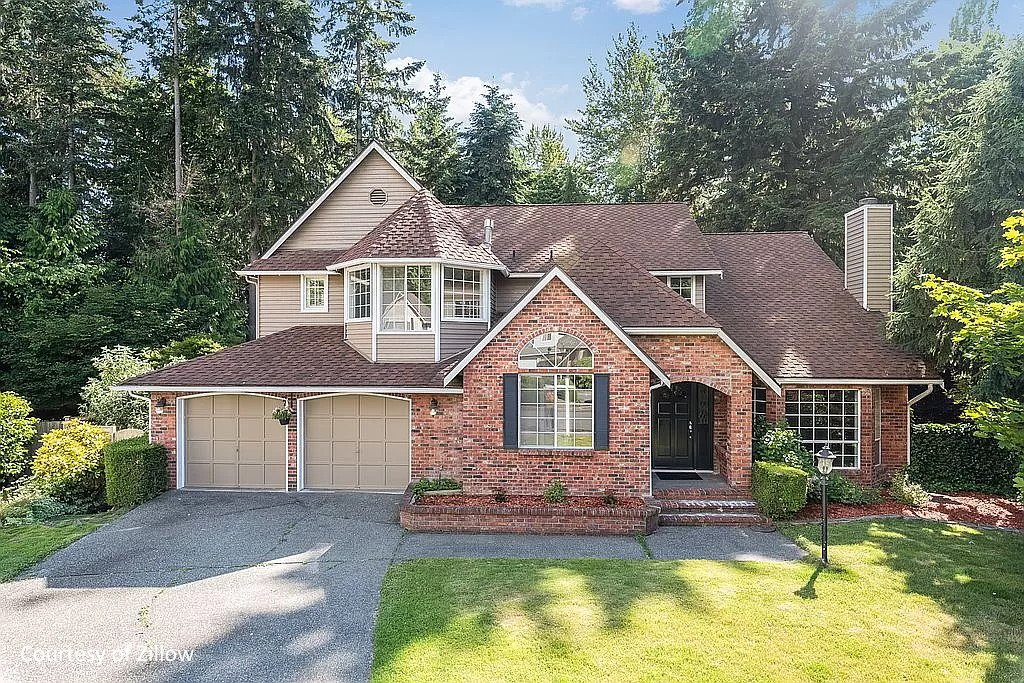 The Alderbrook neighborhood is located in the heart of Federal Way and is one of the quainter neighborhoods in Federal Way. Its borders are North: SW 320th St, West: 21st Ave SW, South: SW Campus Drive, East: 11th Ave SW. Homes here are on the newer side with most being built between 1980 and 1990 and a handful built between 1990 and 2000. Styles are typical suburban with contemporary craftsman, contemporary farmhouse, and other styles of that period. There are also a few apartment complexes in the area including Pavillion Apartment Homes and Sunset Three Twenty Apartments.

The neighborhood itself has a lot to offer. Alderbrook Park is a 25-acre park offering a picnic area, children’s playground, and natural area. Running from SW 323rd St south 16th PL SW is a beautiful, paved 2/3-mile walking trail that takes you through forested areas and past wetlands.

There is one school in the neighborhood, which is Silver Lake Elementary School. Being one of the smaller neighborhoods, Alderbrook doesn’t have a lot of shopping, but what it does have is along SW Campus Rd. You’ll find standard chain retailers and restaurants. The neighborhood also has a fire station and a church. 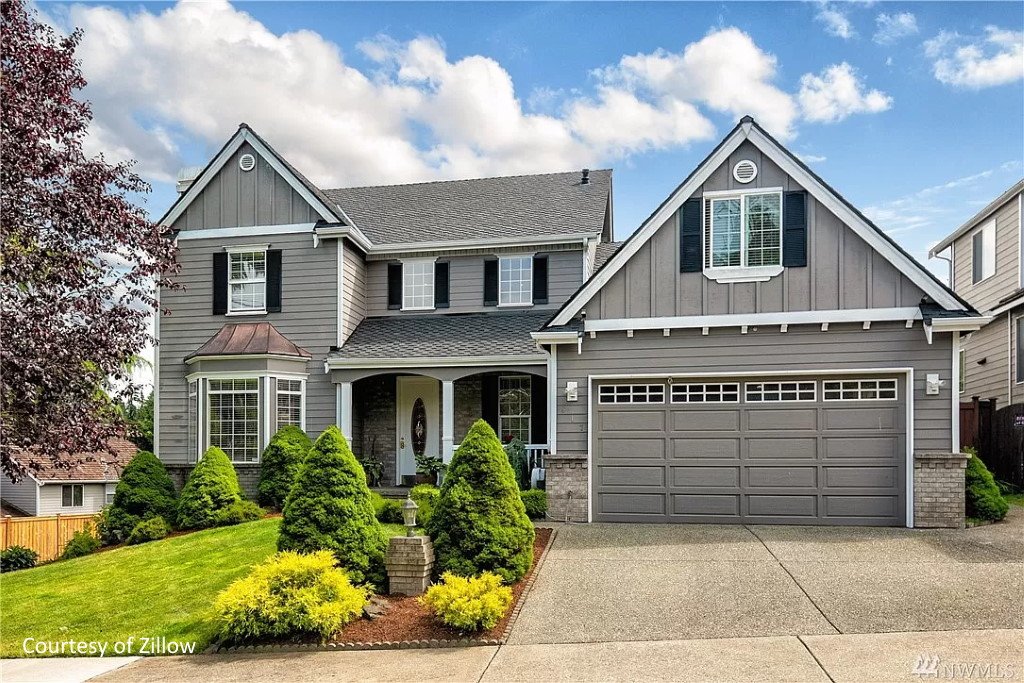 The Madrona neighborhood, also known as Madrona Meadows, is located in south-central Federal Way. Another smaller neighborhood, its borders are 21st St SW on the west, SW 356th St on the south, SW 344th St on the north, and a jagged eastern border encompassing 7th Ave SW and SW 347th St.

Madrona is primarily a residential neighborhood with most homes built between 1980 and 2000. Like the Alderbook neighborhood above, the home styles are typical of that era, with modern farmhouses and craftsmans, some ranches, tri-levels, and contemporary designs. The current year has seen a 21.5% increase in value over the previous year.

The neighborhood has one school—Sherwood Forest Elementary as well as two churches – Northwest Church and Christ the King Bible Fellowship.  Madrona is lucky enough to have the BPA Trail running north to south through the entire neighborhood, which provides residents with a great 3/4 mile path for walking and biking. The main shopping area is in the southwest corner and has just a few businesses including a meat market, automotive shop, and storage facility. Across the street, you can find the Northshore Village.

Laurelwood is in the northern part of Federal Way and has homes built primarily in the 1960s and 70s with styles consisting of ranch, cottage, and split-level.

Steel Lake is a neighborhood just north of downtown Federal Way and is anchored by its namesake, Steel Lake. Homes here are older (built in the 1960s) and on average cost less than other neighborhoods.

So, there you have it. What we think are the best neighborhoods in Federal Way. If you’re buying a house or moving into an apartment in Federal Way, we hope this article helps!