If you’re thinking about moving to Everett, Washington, you’ll want to know what the best neighborhoods are to live in, right?

Before we get into that, let’s talk about Everett. If you’ve done your research then you know that Everett is the county seat and largest city in Snohomish County, Washington. The population of the city is 111,475 as of July 2019 according to the U.S. Census Bureau. Its median age is 36.1 years old. The median household income for Everett is $60,769 (2019 dollars), and 23.3% of the population holds a bachelor’s degree or higher.

The area around Everett has a long and interesting history dating back hundreds of years to when the local Coast Salish tribes inhabited the area. The town of Everett wasn’t incorporated until 1893 and was named after the son of Charles Coby one of the founders of the Everett Land Company. That year was also marked by the arrival of the Great Northern Railway. Everett’s economy was originally driven by the lumber trade, but today is dominated by jobs in the aerospace industry with Boeing employing 39,000 people at its Everett plant. The Naval Station Everett employs another 6,000 as does the State of Washington. Technology-based businesses also employ a large volume of Everettites (I can’t prove that this is the name of people from Everett, but I found a reference here.)

Everett has a great many attractions for would-be residents and visitors alike. The city is home to the second-largest marina on the West Coast. Other attractions include the Imagine Children’s Museum, Boeing’s Future of Flight, Jetty Island, and the Flying Heritage Museum. And the Port of Everett is being redeveloped with a $635 million investment featuring a new hotel, restaurants and luxury apartments.

Now that you’ve been convinced that Everett is the place to live, you need to figure out what neighborhood to live in. Here’s a breakdown of each Everett, Washington neighborhood. 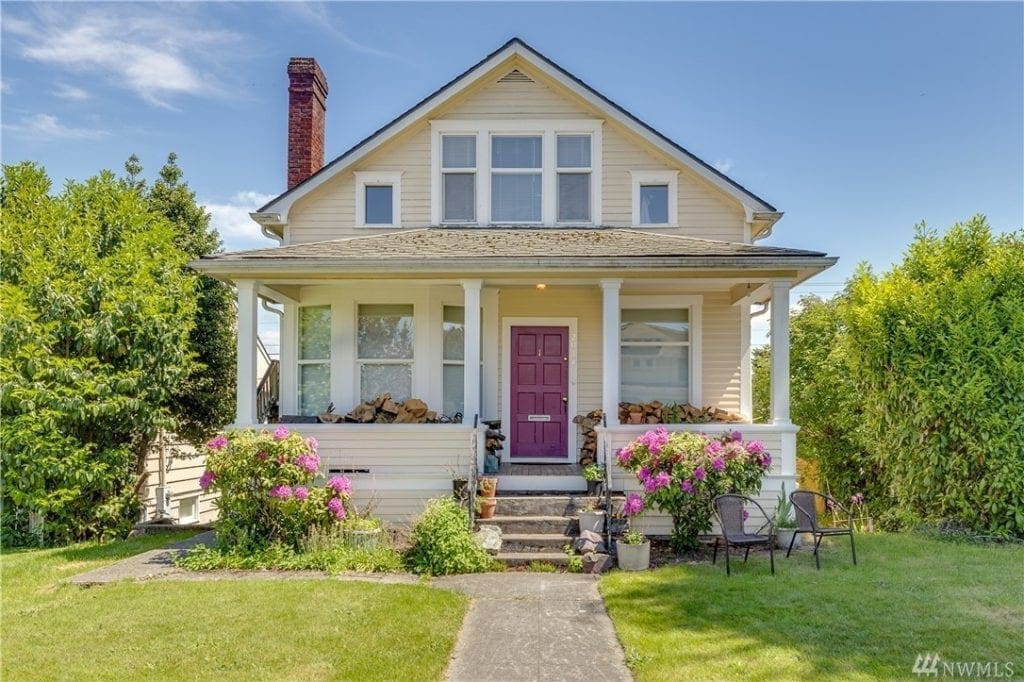 The Bayside neighborhood includes the waterfront area and Port of Everett, the northwest quadrant of the central business district, and a residential area. Bayside features wide, tree-lined streets with beautiful views of the Olympic mountains. It’s home to Everett’s first city park, Clark Park, Everett High School, and Everett Civic Auditorium. Bayside is made up of a diverse architecture from large historic homes such as the Historic Hartley Mansion and Clark Mansion to small former mill worker cottages. There are family-owned businesses along Broadway on the neighborhood’s eastern border as well as large companies near Everett’s city center.  If you’re interested in learning more about Bayside, here is a link to a Bayside Neighborhood self-guided history tour. 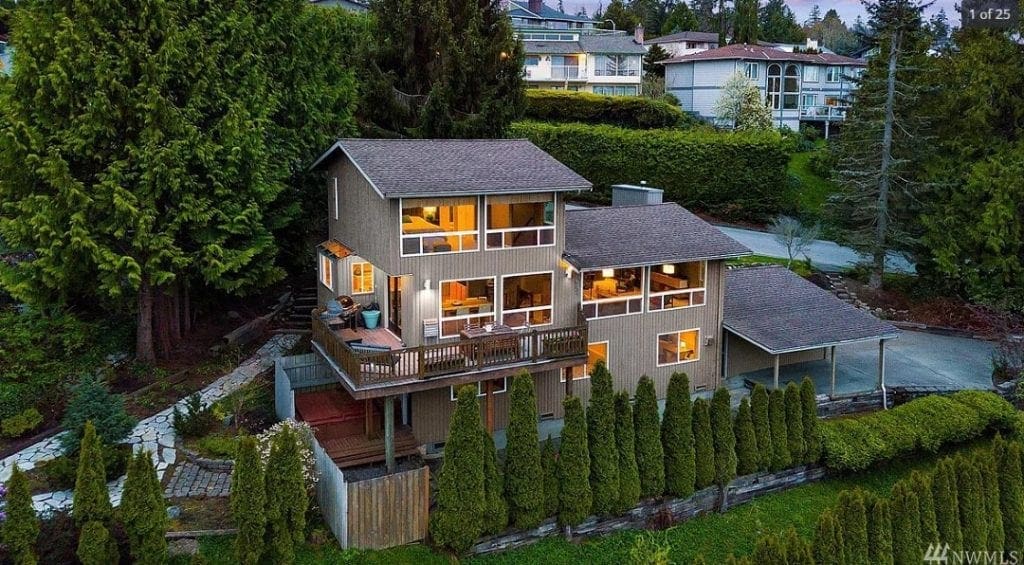 Boulevard Bluffs neighborhood is one of the nicer residential areas in Everett, if not the nicest in terms of beautiful views of Possession Sound and stately homes. The neighborhood boundaries are Possession Sound on the north, Phillips Creek on the East, Merrill Creek Parkway to the south, and the Mukilteo City limits to the west. The neighborhood consists of homes along the bay and businesses to the south, with the biggest being the Boeing ESRC complex (the former Intermec headquarters) with its sprawling, forested campus. Edgewater Park is a small, 1.5-acre park in the northwest corner of the neighborhood, and features a basketball court, playground, and tennis court. Take a spin down Taylor Drive along the north end of the neighborhood to look at some of the huge homes. 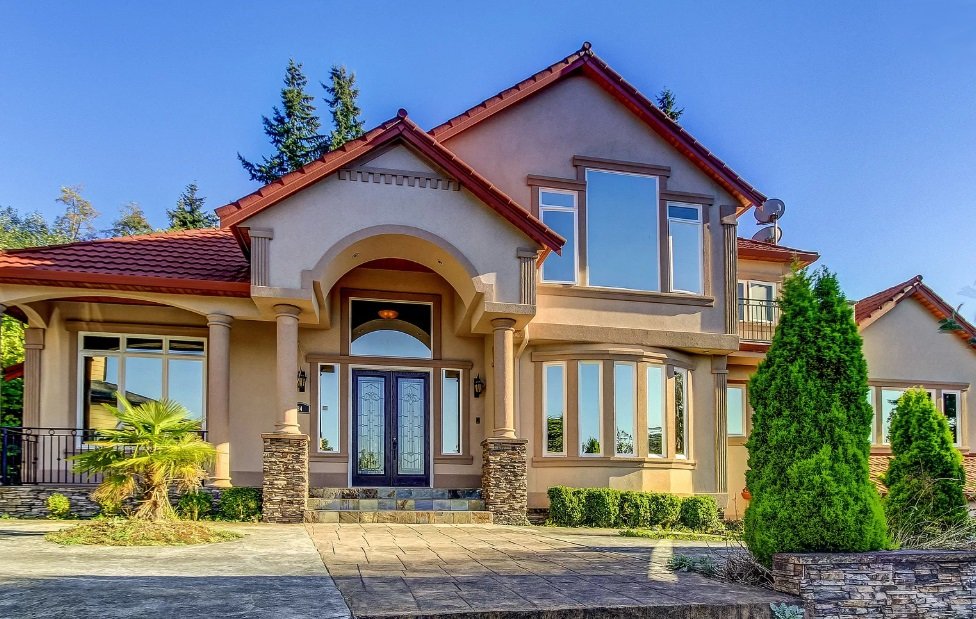 Just east of Boulevard Bluffs is the neighborhood of Harborview-Seahurst-Glenhaven. HSC also borders Possession Sound on its north flank, while its eastern border is Pigeon Creek Number 2. Its southern border is Seahurst/Glenwood, and its western border is Phillips Creek. The neighborhood is primarily residential in nature, with over 900 families making their homes here. The homes here are diverse in their design styles and value with construction eras spanning from the early 1900s to the early 2000s.

HSC has a plethora of private and public parks within easy reach including Harborview Park near the sound. This 8-acre recreation area features a number of trails as well as picnic table to sit at and enjoy the spectacular view. There is also Howarth Park in the upper east corner. The park is 28 acres in size and features picnic tables, a playground, restrooms, a tennis court, as well as trails, and a nice viewpoint. 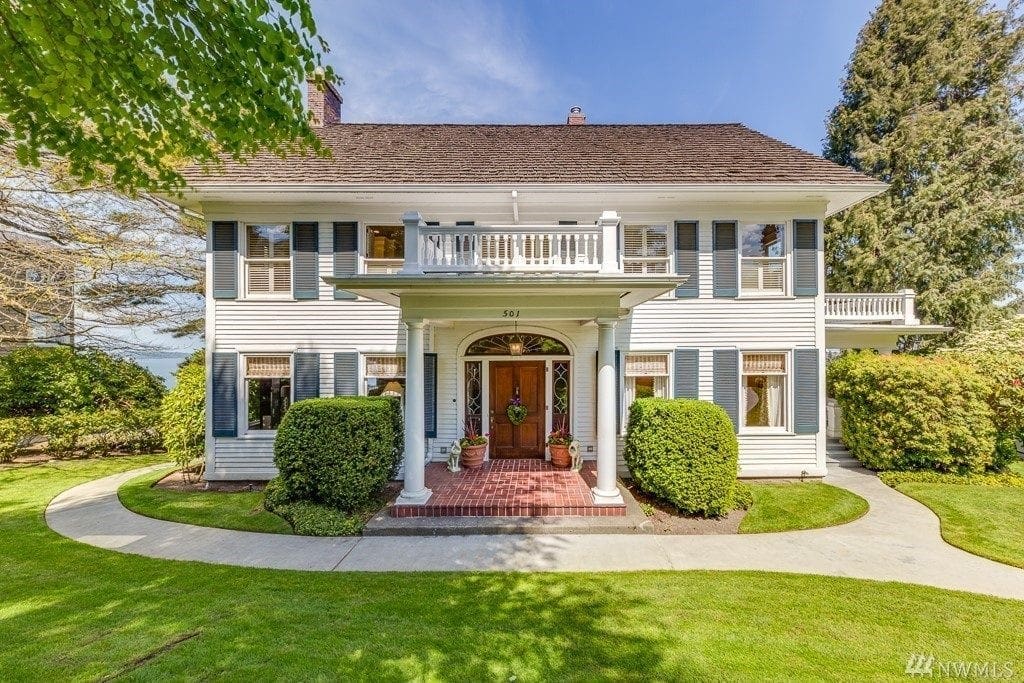 Port Gardner neighborhood is located south of downtown Everett. The boundaries include Port Gardner Bay/Possession Sound to the west, 41st Street to the south, the Snohomish River to the east, and a combination of Hewitt Avenue and Pacific Avenue to the north. The neighborhood is populous enough to have three separate residential districts within its border. Those would be the Rucker Hill area, the Norton-Grand Hill district, and the Longfellow district. Rucker Hill is in the west part of the neighborhood and was one of the first residential neighborhoods in Everett. It includes Rucker Hill Park as well as The Rucker Mansion, the former home of the Rucker family, one of the founding families of Everett. There are some spectacular views of the bay and sound here. Norton-Grand Hill is in the center of the neighborhood and features the W.H. Boner home (a prominent Everett lumberman) as well as Doyle Park. Longfellow district takes up the eastern part of the neighborhood and features the historic Longfellow School. 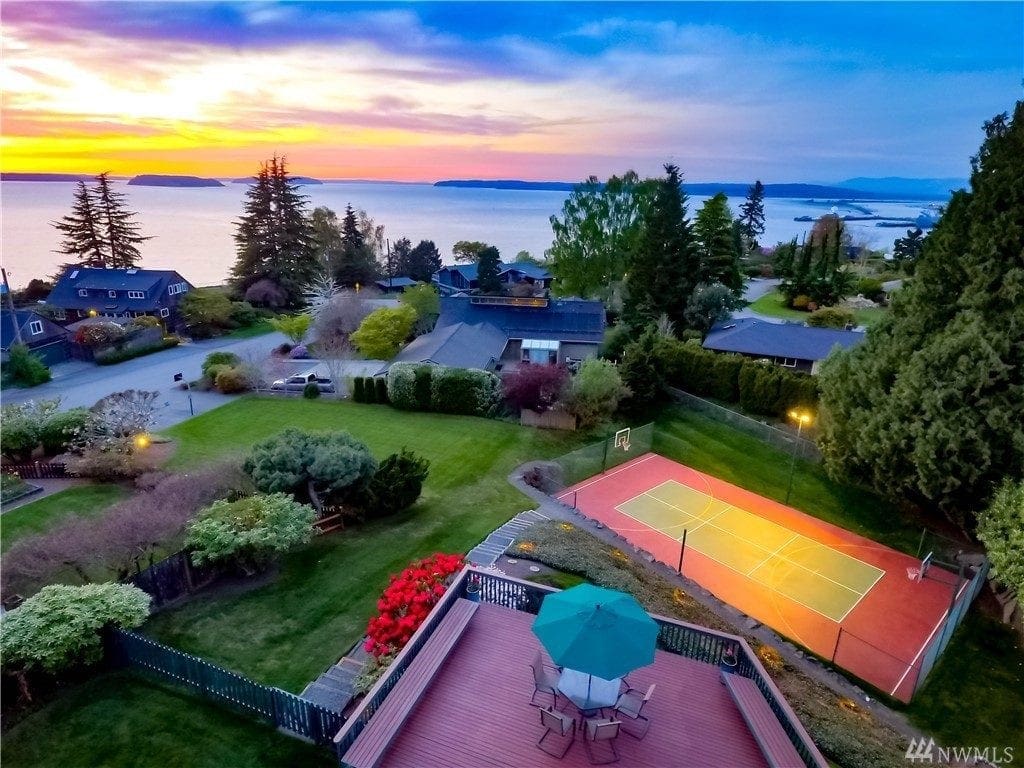 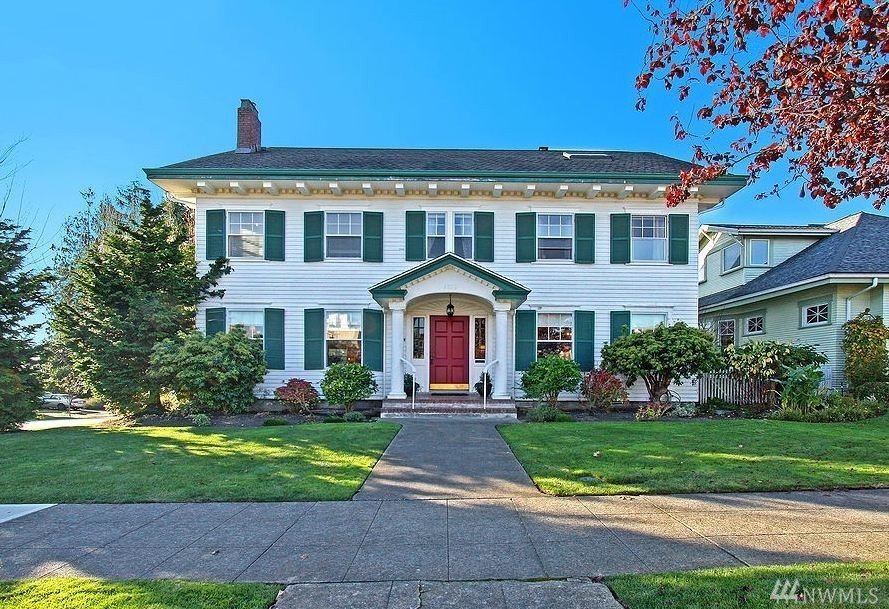 The Northwest neighborhood is north of Everett’s city center and reaches all the way to the Snohomish River. It’s also bordered by Port Gardner Bay to the west, Broadway to the east, and 19th St to the south. As one of the older neighborhoods in Everett, you’ll find established residential areas with full trees and historic homes. The neighborhood features two waterfront parks including American Legion Memorial Park at the very north end of the neighborhood. From the park, you get sweeping views of the bay, the Everett waterfront, as well as Gedney, Whidbey, and Camano Islands. The park contains a playground, baseball field, basketball court, tennis court, picnic shelter/tables, and trails. The Legion Memorial Golf Course is just east.  The park itself also has interpretive signs telling the story of Hibulb Village, the original Snohomish People’s primary winter home. There is also Grand Ave Park to the south of the neighborhood. The park is three blocks long and runs adjacent to Grand Avenue. A walking path runs the length of the park and at its north end has wonderful views of the Port of Everett Marina. Some fantastic, large old homes line Grand Avenue here, with some valued over $2 million. One of these is the Butler-Jackson House built in 1911 by prominent Everett banker William C. Butler. The Evergreen Arboretum and Gardens is also located within the neighborhood. Founded in 1963, the 3.5-acre arboretum features ten themed gardens and offers tours, classes, and plant sales. Everett Community College is also within the neighborhood. 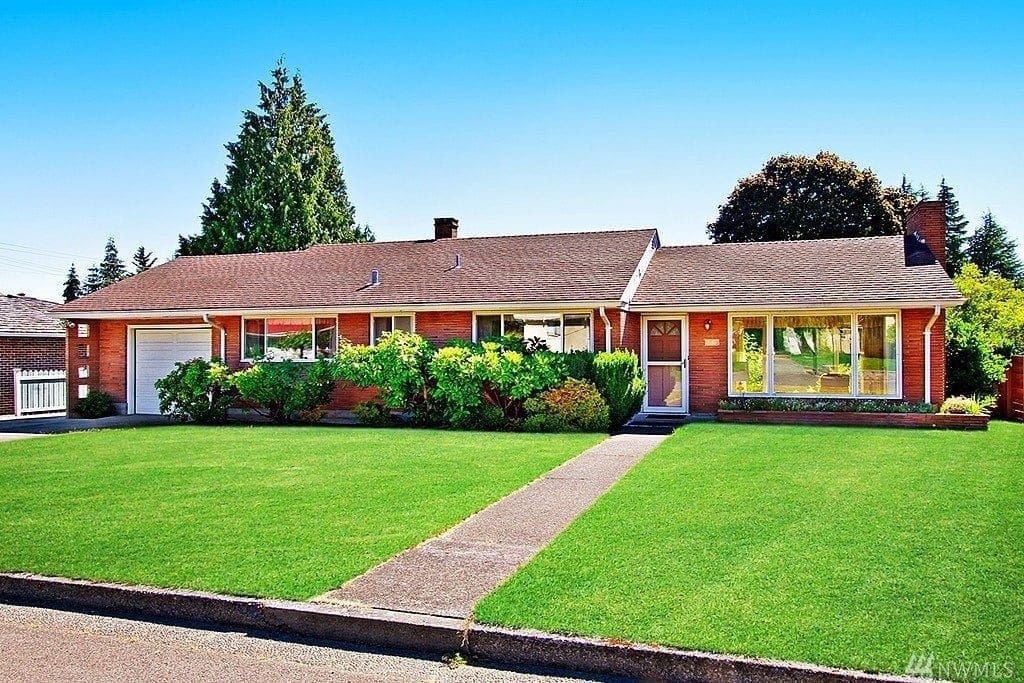 The South Forest Park neighborhood is just south of the Port Gardner neighborhood and east of View Ridge-Madison. Mukilteo Blvd borders its northern end, while Evergreen Way comprises its eastern border. The neighborhood has quite a bit of forested land, anchored by its namesake Forest Park at the north end. This gorgeous 197-acre park was a product of the Works Progress Administration (WPA) and was built in the 1930s. The park has something for everyone including miles of trails, a splash pad, an aquatic center, and a seasonal petting zoo. As for residential real estate, the neighborhood has a mix of single-and multi-residential structures. Single homes range in age from the 50s to the modern-day with the ranch-style dominating the designs.

The neighborhood has a strong association that holds several events throughout the year in collaboration with its neighbor View Ridge-Madison. It also hosts and supports a community garden.

So, there you have it, our choices for the top neighborhoods in Everett. But if those don’t suit you, there are plenty of others to choose from:

Zillow shows the Everett home market is hot right now with a one-year growth rate of 24.5%. Plus, the city of Everett is expecting 60,000 new residents over the next 20 years. With the increase in population, demand for housing will continue to drive up prices if the economy stays strong. So, now may be the time to make your move to this beautiful part of Washington State. If you decide to move to Everett and need a place to temporarily store your belongings, consider using Anthem Self Storage. They offer brand-new, heated storage units at affordable rates.